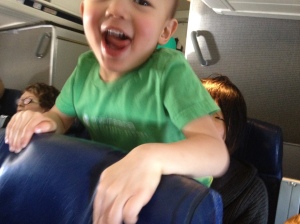 No one likes to fly with kids. But most parents do it anyway, to teach their kids how to travel and in order to travel themselves. Tom and I are not those parents. We used to travel, to interesting places. No longer. Now, there is almost nowhere I need to be so badly that I am willing to fly with my kids to get there. At this point, I won’t even drive anywhere further than two hours away with my kids, because two hours is exactly how long a 90 minute DVD lasts after you’ve kept your hounds at bay for the first 30 minutes of your car trip using fruit leather and window stickers.

Finn, my older kid, has been interfering with our travel plans since he was in utero. A long-planned fifth anniversary trip to India coincided with Finn’s 12th gestational week. I ignored my doctor’s advice and got on the plane for the Subcontinent, where I experienced a sustained bout of nausea and vomiting the likes of which, I am convinced, have yet to be experienced by any other human. Not to get too graphic about it, but if one vomits too forcefully, they will break blood vessels in their face. That’s the kind of vomiting I’m talking about. I vomited that way for four weeks.

India is an amazing country, but it’s not the country you want to visit if you are in the throes of morning sickness. We had scrimped and saved to spend two weeks in a series of Oberoi hotels; I made it to Delhi, Agra, and Jaipur before Tom put me on a plane for home halfway through our trip. I recall almost nothing about the trip except the Taj Mahal and the fact that each hotel had lovely and intricate tilework surrounding the base of the toilets. Because Tom was flying on to Kazakhstan for work at the end of the trip, he got to spend a romantic five nights in Mumbai, by himself.

Just as Finn started to reach an age where the prospect of flying did not make me want to gouge my eyes out, things got exponentially harder, because Tate came along. I say exponentially, because Tate, unlike Finn, is a bolter. 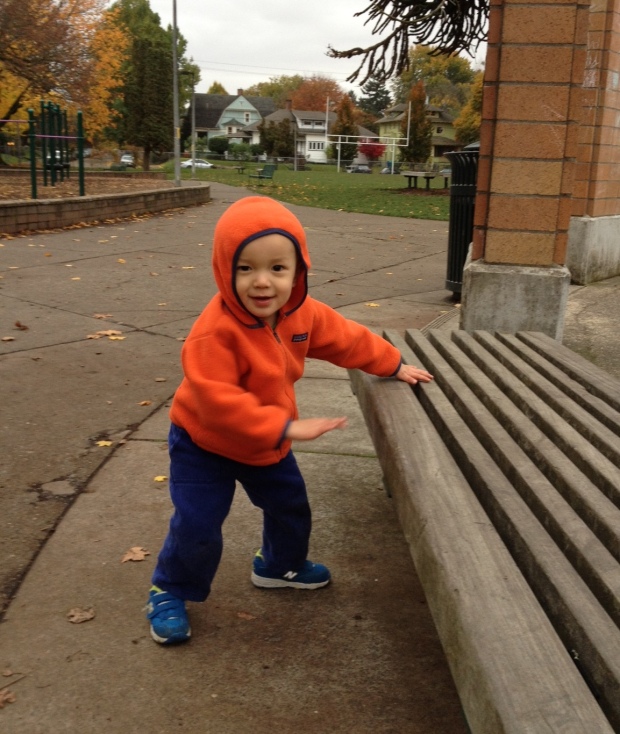 Here he is in his launch pose. Most of our other photos of Tate are blurry, or only include one foot in the frame. Combine Tate’s bolting with Tom’s generally distracted nature, and you have a situation ripe for traveling disaster. It’s not just Tom–I once turned my head at an airport and found Tate riding the baggage carousel by the time I turned it back.

But, I can’t avoid flying with my kids forever. Tom’s family has been kind enough to come out to Oregon for the last couple Christmases, and now it’s our turn. So, here I am, packing for North Carolina. And the dread I feel for tomorrow’s flight is palpable. The packing itself is stressful, as we have to make certain that we have packed each of the 39 codependency objects my kids require when they leave home. Like the sound machine. That’s right, a sound machine. You snicker, but try getting your kid to sleep without a sound machine when his cousins are out in the living room playing video games. Also essential: carseats, for the rental car that you’ll be driving when you land. Our carseats weigh approximately 80 pounds apiece, and were designed specifically to frustrate parents who have to lug them from the car to the terminal, as they have no handholds or grips. For those who have not had the pleasure, carrying such a carseat is comparable to carrying an 80-pound metal safe covered in Crisco that you can’t quite get your arms around.

Speaking of portability, don’t forget the ratty yet voluminous blankets your kids need in order to fall asleep, because sleep is the holy grail when flying with kids. My kids’ blankets trail behind them on the airport floor, picking up SARS and Ebola virus on the way. And it’s all for naught, because it turns out those blankets don’t work their magic on the plane. Your kids will be awake for the entire flight. If you’re tempted to try Benadryl to get them to doze off, don’t bother. God laughs at you. I tried it with Finn once and his system reacted like I’d given him speed. So why bother with the blankets, right? Right. Try leaving the blankets at home and see how your kids handle it. Just try. I dare you.

Once you’re on the plane, the fun really starts. If you don’t have kids, I’m going to explain something right now that may blow your mind. And that is this: there is no possible way to prevent a child from kicking the back of the seat in front of him. There just isn’t. It’s a bodily impulse for a kid that cannot be stopped. Before I had kids, I was the asshole who would recline their seat all the way back and then bitch loudly about the kid behind me kicking my seat. As a parent sitting next to such a kid, the best you can do is continually hound them to stop, even though you know he’s as powerless to stop as you are powerless to fly the plane. The hounding is not for you, or for your kid. It’s for your audience–the people around you–to indicate that you really are trying to stop your kid, even when you know you can’t.

So many other pleasures to discuss, but my packing awaits. I will end by saying that if you have a baby and the baby is flying in your lap, I have special sympathy for you. I flew to Cabo once with Tate on my lap, and he was a leggy one year old at the time with elbows like Bill Laimbeer. He kicked and screamed the entire way, much to the delight of the entire cabin. At one point I just let him walk up and down the aisle unattended, because I had no other recourse. None of my efforts to get him to sleep worked–until, that is, we landed in Mexico. Upon deplaning, Tate promptly fell into the deep, silent slumber that I would have given my left kidney for during the flight.

Tags: flying with kids
From: kids, travel
← better half
what a football coach can teach you about clothes →
35 Comments Post a comment