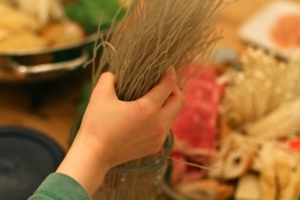 If I can get the energy together to cook something worth eating, I’ll usually invite friends over on short notice, because there’s no way that rare burst of initiative is going to waste on my husband and kids, who generally take me for granted.  But not just any friends–just my low-maintenance ones.  The ones who don’t care that I’m cooking in sweats, who will navigate the minefield of Legos in my entryway to get to the dining table without batting an eyelash, and who know that I use paper towels for napkins because, let’s just get it out there–I believe napkins to be a marketing ploy.  It’s like eating with family, with better conversation and without the emotional baggage.

When it comes to food, I’m prone to eating so much of something I like that I eventually never want to eat it again.  This winter, it’s been a lot of shabu-shabu.  I like hot pot cooking because it’s convivial, healthy, and fun for kids.  You can throw almost anything into a hot pot, so you can pick ingredients that work for your family.  Just chop up the ingredients, warm up a bottle of sake, and settle in for some communal piggery.

My friend Monica and I met in a birthing class, and reconnected two years later when our boys ended up in the same class in the same daycare, purely by chance.  Only then did we figure out that we lived on the same street, four blocks apart.  Some things just feel like fate.  This last Friday she arrived with her men, armed with booze, a box of cupcakes, and her own cake stand.  And her camera, to take the awesome photos in this post, even though I never asked!  We had a swell time–the perfect antidote to a supremely crap week. 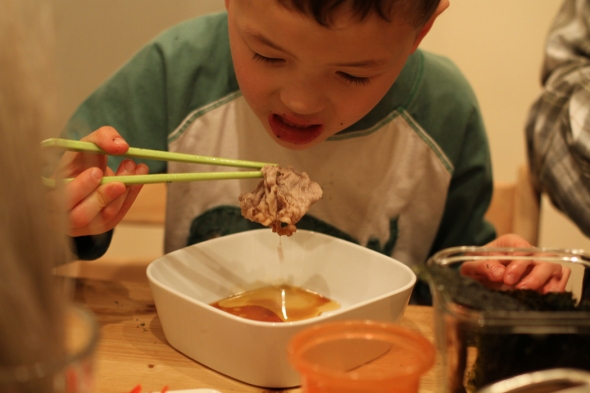 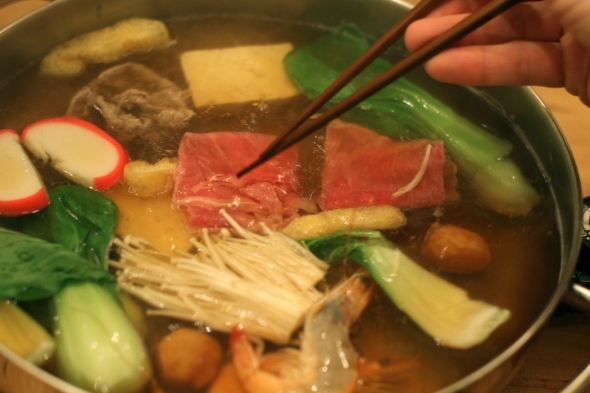 Everything but the Kitchen Sink Shabu-Shabu

The ingredients for this are totally variable.  I assemble stuff based on color and visual appeal, but generally you might want some vegetables, a meat or seafood of some sort, and then a noodle to throw in at the end.  If you have an Asian grocer nearby, get creative.  For this dinner, I used:

Blitz all ingredients in a blender until processed.  Add more water if you want a thinner consistency.

1. Wash and arrange all ingredients on a couple platters.  You want everyone to be able to access the ingredients, so I usually assemble two platters, one for each side of the table.  Get creative.  Don’t worry about how small things should be cut, just keep in mind you want to keep things big enough so that they are easy to fish out of the pot once cooked.

2. Get your dashi going.  Fill your skillet or hot pot about 1/2 full, and bring to a boil with a couple pieces of kombu (dried seaweed) and a few dried anchovies.  Let simmer for 10 minutes, then fish out the solids. Swirl in some soy sauce.  Don’t worry if your dashi doesn’t taste like much, you are just creating a base.  By the time all the other ingredients are added in, you will end up with a beautiful hot pot full of amazing flavors.

3. You’re ready to cook!  Get everyone a pair of long chopsticks and encourage them to drop in whatever they want.  Encourage your guests to experiment with the condiments to come up with their own sauce for dipping.  I usually suggest soy and sesame oil to start.  Pour some sake, and enjoy!

**Notes: You may need to add more water as you eat, if the dashi cooks down too far.  Save the noodles for the end, because they will soak up a lot of liquid.

You do need a hot pot for this meal.  You can buy a ceramic one to use over a portable propane burner (this is how Asians do it at home), but I like an electric skillet, which is deep enough to hold the broth, and wider than the ceramic versions.  For me, wider is better so more people can access the pot.  You can use the skillet for pancakes on the weekend.  If you’re eating with young kids, keep an eye on them so they don’t accidentally burn themselves.  I can guarantee they’ll love throwing stuff in the pot and fishing it out.