The upside to having more than one kid is that when you just can’t stand one of them, you can turn to the other. All you child worshipers: relax. I don’t tell my kids to their faces that their sibling is my preferred child of the week. I merely let my actions imply it.

Tom and I are just coming out of a three-month stretch with Finn that is best summed up by this image:

Munch must have had a five-year old

The figure in the front could be me, but it could also be Finn. Because for three months, he literally could not open his mouth without screaming. Everything I did or said pissed him off. He also started acting up in public, a new phenomenon for which I was wholly unprepared, because I was raised by a true Korean mom, and acting up in public just doesn’t happen with a true Korean mom (I’m apparently a fake Korean mom). The one time that my brother and I got loud in a restaurant, my Mom made us raise our arms straight up in the air and hold them there for ten minutes while she calmly finished her meal. A kid only needs to experience that kind of humiliation once for the lesson to take.

During the three-month stretch in the wilderness with Finn, my younger kid was in the background, doing his best imitation of the Baby Jesus. Born an easy baby, Tate was so low maintenance that I forgot he was there for long stretches of time. He would play with his toys by himself, flip through books in a sunny corner, and regularly update me on the status of his diapers. 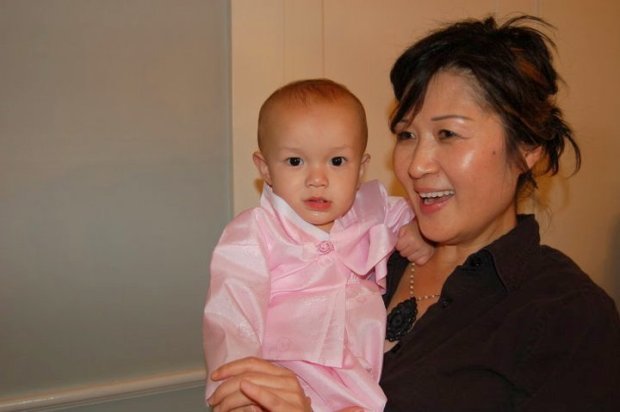 easy tate with grandma on his first birthday

The harder Finn got, the more I unintentionally gravitated toward Tate. I’m a human first, a mom second. In retrospect, I imagine Finn picked up on some of it and that it only made him madder. In fact, Finn probably felt the way I feel when he says he wants Daddy to put him to bed, seventeen nights in a row.  Or when, at pick up, he greets me with a loving “WHERE’S DADDY??”

But things have a way of evening out, especially with kids. Now, Tate is solidly in his twos and feeling his oats. Last night he climbed on my lap, but instead of giving me the usual slobbery kiss, he curled both his fists in my hair and yanked with alarming vigor. When I said “ouch,” he cracked a feral smile and did it again. He has started announcing that he’s done with dinner by shoving his dishes off the table. And every night, he wears Finn’s ski helmet around the house, just butting his head into things. Last night, I found him helmeted, on top of a chair, banging his beloved plastic sword against my Cynthia Lahti. 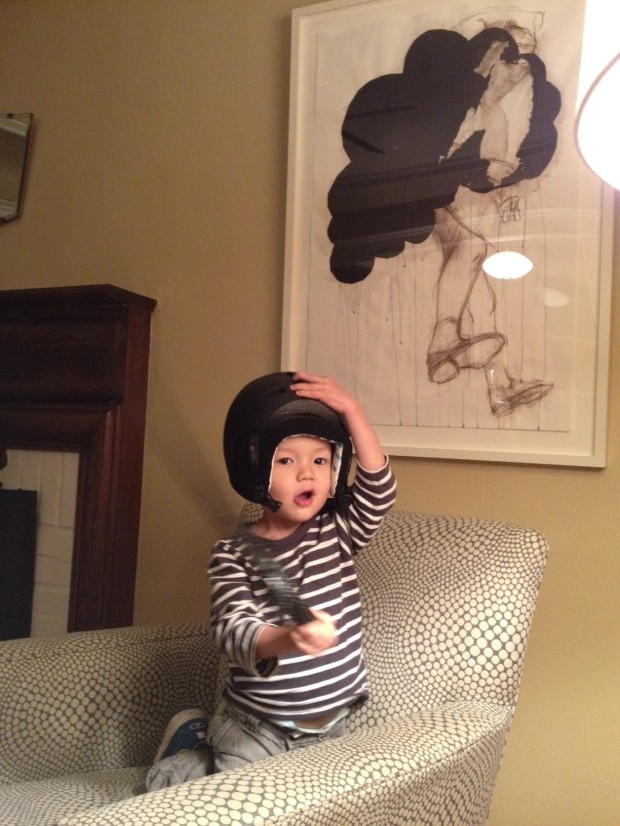 not so easy anymore

So of course, it’s Finn’s turn to be awesome. Earlier this week, I left him in the car with a cookie while I ran inside the school to pick up his brother. As I got out of the car, I told Finn to finish the cookie before I returned with Tate, in case Tate got jealous. When Tate and I got to the car, as expected, the cookie was nowhere in sight–until, that is, Finn quietly pulled out a piece he’d saved in the car door, and handed it to Tate. I felt so much love for Finn in that moment that I stood in the car door for two minutes, nuzzling him with kisses and being rewarded with his laughter. I’ll gladly take three months of screaming for a few more moments like that.

Well, maybe like ten of those moments.  Anyway, it’s all good. It’s ok that Finn prefers his Dad sometimes, and that I prefer his brother when Finn’s pushing my buttons. Because it all evens out in the end, and there’s plenty of love to go around.