a whiter shade of pale

To know Tom is to know that he is pale.  On the spectrum of skin colors, I’d put him somewhere between George Will and Anthony Michael Hall.  In addition to being very fair, he has the kind of skin that is impervious to tanning.  But that hasn’t stopped him from trying to harness his inner George Hamilton.

Ten years ago, when we were in the last crucial months of wedding planning, Tom devoted a fair amount of annoying mindspace to the concept of creating a “base tan” for our honeymoon to Bali.  Not having dated anyone that pale before, I assumed he knew what he was talking about and didn’t really think anything of his trip to the tanning salon.  Until he got back from the tanning salon, and was vermillion.  It looked like he had fallen asleep in the tanning bed for two hours.  Turns out he had been in it for six minutes.  I suspect he asked for more time, and that, like the barkeep who refuses to serve you that last drink, the tanning bed operator took one look at Tom and refused to let him go any longer. 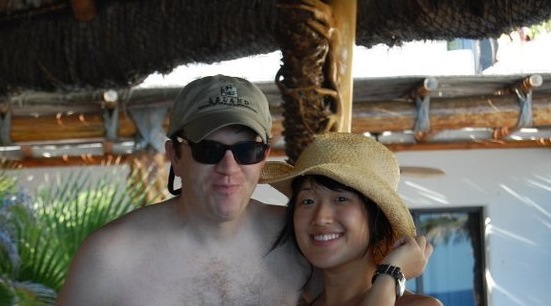 On any beach vacation, I watch Tom’s tanning routine with equal parts amusement and alarm.  The first day always starts with him asking whether he should start with the SPF 8 or the SPF 12.  I don’t know why he even consults me.  I respond as I always do, that he might instead opt to begin with the SPF 45.  He waves me off and, having settled on the SPF 8, begins the careful process of application.  This part always takes a good 20 minutes.  He starts from the tops of his feet and works all the way up to the backs of his ears.  It’s all for naught, though, because as I said, it’s SPF 8, which is essentially Crisco.  So that first day of the vacation, he will fry to a crisp, and spend the rest of the vacation tossing and turning in his sleep and popping Advil like M&Ms.

The sad thing is, for all the trouble he goes through, after the initial burn, he still looks pretty damn pale.  The awkwardly cropped (Tom-mandated cropping) photo of us was taken on the fourth day of a trip to Cabo, the one directly above, on the seventh day of a trip to Maui.  SEVENTH DAY.  Take me out of the photo and you might believe that the photo was taken in Newfoundland.  Whatever tan/burn Tom has managed to work up by the end of the vacation will inevitably fade away during the flight home.  So I think he often returns to work and hears comments along the lines of “Hey man, didn’t you say you were going on vacation?”  And that’s gotta be frustrating.  So I sympathize with him, and try to be supportive of his struggle.

The skin color thing is funny.  My kids are starting to notice that all four of us are different colors.  Finn is almost as pale as Tom, although he does not burn.  Tate came out of the womb looking like he’d spent his third trimester in the Bahamas.  If we were L’eggs pantyhose colors, we’d be Alabaster (Tom), Ivory (Finn), Nude (me), and Suntan (Tate).  Soon, I’ll turn Tom’s color into a teaching moment.  I’ll explain to the boys that in spite of how he looks on the outside, their Dad, on the inside, is the same as the rest of us, and has the same worth.  Except that he’s paler.