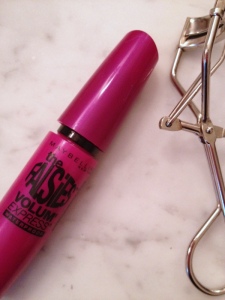 Is there anything as unchanging and reassuring as a magazine article on “beauty steals?”  It’s always the same products: Cetaphil for cleaning, Elizabeth Arden 8 Hour Cream for “anything and everything,” Rosebud Salve, and the perennial pick, Maybelline Great Lash mascara.  I’ve never tried the 8 Hour Cream because apparently I don’t need a cream for “anything and everything.”  Rosebud Salve is fine if you don’t need your lip product to actually adhere to your lips, and you also don’t mind the taste of soap.  As for Cetaphil, it’s just gross.  It’s like washing your face with vichyssoise.  It’s always touted as being gentle, but I’m sorry, I don’t require gentleness from a cleanser.  What I require is something that leaves my skin so clean that it squeaks.  If I could wash my face with a brillo pad, I would.  If you like that feeling too, try this.

As for the mascara, it takes a lot more than Maybelline Great Lash to make something of my Asian eyelashes, which are short, fine, and sparse, like the eyelashes you might find on a 6-pound mini pinscher.  I had to overcome a strong visceral reaction to that particular combo of green and pink in order to purchase a tube of Great Lash, and it turns out I needn’t have bothered, because it sucks.  I mean, if you are Caucasian and/or are already blessed with visible eyelashes, maybe it cuts the mustard.  But if that’s the case, certainly any mascara will work, including those that don’t look like they were conceived for a 12-year old.

There IS a Maybelline mascara that actually works for the eyelash-challenged.  I can’t even type the name here because it’s so terrible, but I’ve provided a photo.  A month ago, this mascara prevented me from killing myself when I learned that Shiseido is no longer selling its Lasting Lift mascara in the states.  Forget Dior Show, forget Lancome, forget the $35 tube of Chanel–all of which I have tried, some twice because I forgot I had tried them before.  If you are Asian, a Shu Uemura curler warmed under a hair dryer + Shiseido Lasting Lift = all-day curl and volume.  But no longer.  I am starting to feel hysterical writing this, because it’s really hitting me that it’s over.  I took my mascara for granted, and now it’s gone.  Those pathetic people who hoard their favorite beauty products?  Sages, every damn one of them.

Anyway, my friend Davia is no slouch with mascara, and she suggested the purple Maybelline, and it works.  It’s no Lasting Lift, but it’ll have to do.  It makes my eyelashes visible, keeps them curled up for a while, and the waterproof version doesn’t smudge too much.  If you like subtlety in a mascara, this one’s not for you.  But for the rest of us: at $7.99, it’s worth a shot.