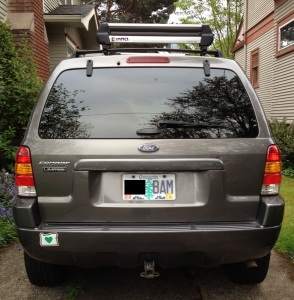 Everyone makes sacrifices in a marriage. Because Tom’s dad worked for Ford almost his entire life, Tom has insisted from the moment we began commingling funds that we drive only Ford or Ford-owned brands. For twelve years, I’ve been happy to oblige, because I’m a giver. Actually, as a Korean, I’m predisposed against Japanese cars anyway. I feel similarly conflicted about Japanese food, although I’ve managed to choke down vast quantities of tempura and green tea ice cream over my lifetime. Anyway, buying Ford felt patriotic, like baking an apple pie in cutoff jean shorts.

Now that I’ve cruised around in two successive Ford Escapes for the past twelve years, I feel that I’ve done my time. The mandate is starting to chafe a little. Especially since Ford sold off Volvo and Land Rover. I don’t need a status car, because I need that money for clothes, but I’d like something a smidge nicer. The need for a new car became more dire last week when Finn asked me why my car is “so old,” and “so small.” Which immediately made my armpits break out in a cold sweat, and led me to start asking the same questions of Tom.

My need for a new car is no longer about me. It’s about the children.

It is my weakness that I love new, shiny things. My disenchantment with everything I own begins as soon as I tear off the price tag. Which just goes to show how much I have suffered for the cause. Because not only is my current Escape not new, it is actively falling apart. The outside trim is coming unglued, and makes a jarring clanging noise when I close the back doors. While the outside is rusted out and old, the inside is a hothouse, teeming with life. I refer to the car as “the Biosphere,” because flies have been born inside of it, and lived full, rich lives, feasting on the apple cores and bagel crusts that my children leave to rot under the seats. If you think I’m kidding, I’m not. Here’s a fly I recently killed, on my dashboard. We coexisted peacefully for weeks until he started flying directly in front of my face while I was driving. I mean, they can live in my car, but they can’t DRIVE.

Anyway. I want a new car. It needs seating for seven. Best if it’s a Ford. What should I get?