I’ve struggled with my kids’ eating habits since they were old enough to say no to the food they are offered. In fact, I’ve struggled enough that I’m ashamed to say that I find it difficult to be happy for parents whose kids eat vegetables. I’ve been in situations where I’m commiserating with another mom about our kids’ eating, and then the other mom will ruin it by saying something like, “Jack won’t eat brussels sprouts…unless I cook them with bacon!” I mean, come on. I could coat brussels sprouts in a thick chocolate shell and sprinkle them with Legos and my kids still wouldn’t touch them with a 12 foot pole.  I also enjoy it when other moms say stuff like “Have you tried putting ranch dressing on the vegetables? My kids love that!” No, it never occurred to me to put ranch, or butter, or maple syrup, or balsamic, or cheese on the vegetables. Bitch, please.  I’m no amateur.  I’m sure Finn would love cheese-covered vegetables, if he ate cheese.

Recently, when I watched my friend Kathryn offer her daughter Charlotte (below) some beautiful unpeeled carrots with the green fronds still attached to them, I felt a stab of envy, and then, self-loathing. If those carrots had been offered to my boys, they would likely have looked at them with confusion before asking what they were. Where did I go wrong? Why was I such a bad mom?

Most of my low points as a mom have been spent wrestling with my kids over food. My very lowest moment, which I am very ashamed to write about here, happened when I was struggling to identify new protein sources for Finn, when he was 4. Because he ate beef, I stupidly convinced myself that I could make him like pork tenderloin. I carefully roasted it in the oven covered in a delicious apricot glaze, and cut him five small pieces. I asked him to eat them. He refused. I asked again. He refused again. The sun began to set, and the food got cold. But I was determined. So we sat there. For an hour. Finally, angered and scared at the prospect that my kid would refuse food for the rest of his life, I lost my mind. I turned off the lights in the dining room and left him in the dark, hissing that he should “have fun with the monsters.” Hysteria ensued. He ate three pieces of pork while sobbing and gagging. He ate the pork, but the price was too high.

Now that Finn is almost six, I’m working overtime to figure out ways to get him to eat vegetables. Finn will willingly eat peas and corn, but I can’t even feel good about that, because apparently peas and corn barely qualify as vegetables given their high sugar content. That’s right, peas and corn are the new Count Chocula. This past winter, we discovered that Finn likes the napa cabbage we cook in shabu shabu. I doubt cabbage has much nutritional content either, but I’ve nonetheless eaten a lot of expensive shabu shabu in the last six months, just so I could get him to eat the cabbage. I once also got him to eat a piece of zucchini that was in a miso soup. Once. Anyway. You know you’re in trouble when you can recall every instance of your child eating a vegetable in his entire life.

Last weekend, my friend Mollyanne listened to me agonize over my kids’ food issues, and took me firmly in hand.  At our house for dinner, she disappeared for 20 minutes and then came downstairs with the chart below, which she put together with Finn. He chose all the options, and for the last two days, he has been excited to look at his chart and make his lunches with me. Yesterday, his vegetable came back untouched. Today, he ate his veggies, although they were peas. Tomorrow, we try cukes. 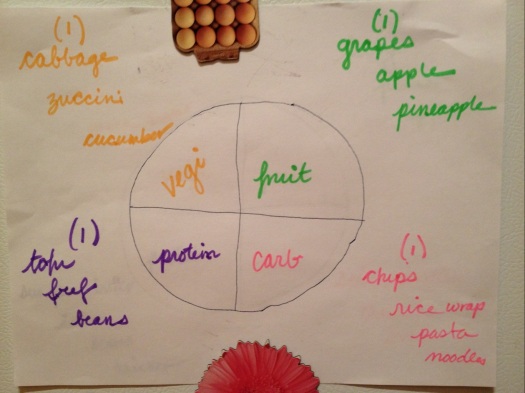 I am grateful to my friend, who sensed my genuine distress and guided me by taking action. I’m also hopeful. And hope is a lovely emotion to feel after so many months of despair.