For the last three years, I have successfully avoided traveling with my children unless absolutely necessary. But given that Finn is now almost six, what I had previously justified as self-preservation began to feel a little like I was robbing my kids of formative experiences. So I booked a trip to Legoland.

When traveling with children, I find that it helps to build up the dread beforehand until it’s well-nigh immobilizing. There’s no way your trip can end up being as horrific as your imagination, so you’re left with the conviction that you nailed the vacation, and nailed it but good. I also recommend having a parenting partner as organized and goal-focused as mine. Of the many epiphanies I experienced on this trip, the most profound one was the realization that I had somehow ended up marrying my dad.

My dad was a master planner and organizer. But he had nothing on Tom, who views planning and organizing with the glee that most of us reserve for birthday cake. At Legoland, I saw Tom in his element. The morning of our visit, he hurried the family through showers and breakfast, having heard that the parking lot at Legoland can fill up well before 9:30, when the park opens. My rational mind told me that it didn’t make sense to drive to Legoland at 8:30 when the park didn’t open until an hour later, but the thing about panic is that it bears no regard for the rational mind, and is contagious to boot. So I followed Tom’s lead, yelling at the kids when they failed to shotgun their orange juice with appropriate speed, and snapping at the valet who brought our car around two minutes behind schedule.

It’s a good thing we hurried, because, as you can see, the parking lot was almost full when we screeched in at 8:40 AM.

I had a few pithy comments for Tom at the moment that I was surreptitiously taking this picture, but I kept them to myself, partly because we had made a pact that we would be especially nice to one another that day, but mostly because I felt sorry for him. Not that Tom himself was fazed. Tom doesn’t second-guess himself. Tom also doesn’t feel embarrassment, like normal people do. Here, opening up the stroller, he was probably congratulating himself on the prime parking spot that his efforts had secured for the family.

We moved to the entrance, where we couldn’t even burn time off the clock by buying tickets, since we’d already purchased them beforehand to avoid the lines that we discovered to be non-existent at 8:45 AM. So there we were, with 45 minutes to kill at the gates, with a 2-year old and a 5-year old. As any parent can testify, 45 minutes in bored toddler time is roughly equivalent to 17 adult hours. We hadn’t even entered the park and I already felt exhausted, and scared. How would I divert them for 45 minutes, when my iPhone batteries were good for only another 25? 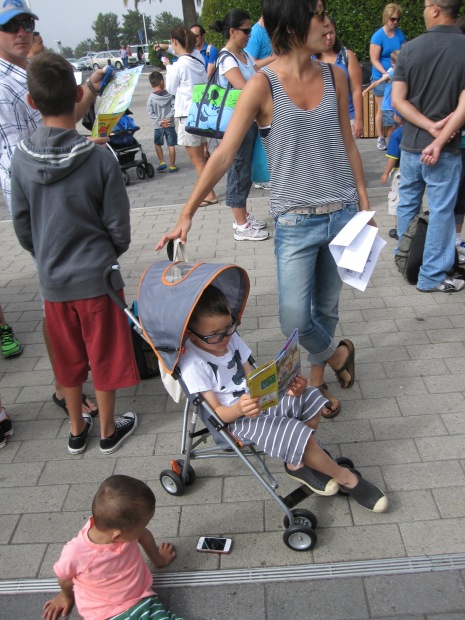 Thankfully, Tom had plans for that time. Laying out the park map, he began planning out the day’s route with the boys. Convinced that the commoners would start their day by moving to the right through the Imagination Zone, Tom insisted we would begin by going left, through Dino Island and DUPLO Village. I listened to Tom mutter to himself that if everything went according to plan, we could be at Star Wars Miniland by lunch.

Once the route was all planned out, Tom asked me to stay with the boys while he got tips from Guest Services about the best way to rack up points on his Lego VIP card (below). For those not in the know, the VIP card is the free membership card you get at your local Lego store. You accrue points with your Lego purchases, to be saved up for rewards, like free Legos. Tom remembered to pack and bring the Lego VIP card all the way from Portland to Legoland, which requires a level of foresight and nerdiness that I’m at a loss to put into words. The closest thing I can compare it to is bringing your Benihana Chef’s Table membership card with you when you go to Benihana on your birthday. I always have the intention of doing that but inevitably decide that my pride is worth more than the cost of a meal. Anyway, Tom thought he’d rack that VIP card up with a ton of points from the day’s purchases. So I’m really proud that he kept it together when he came back from Guest Services to tell me that the VIP card doesn’t work at Legoland, because Legoland is not, it turns out, owned by Lego.

Once inside the park, Tom got over his disappointment about the VIP card and turned his attention to his ultimate goal: getting Finn on Legoland’s marquee ride. At Legoland, there are a bunch of rides, but the most popular ride of all is the Volvo Driving School, which is essentially a large plot of land with a bunch of streets on which kids aged 6-13 can drive around in little Lego cars. I have no explanation for the popularity of this ride, which is like bumper cars without the excitement of the bumping. But it is highly touted in the guidebook literature as one of the featured attractions at Legoland, and as such, Tom wasn’t about to let an age requirement keep his firstborn from getting into one of those cars.

The end result was hardly certain, as everything hinged on Finn’s ability to lie to an authority figure, something he had proven himself incapable of doing a year ago, when, as a tall four year old, we asked him to say that he was five in order to get into a day camp at a lawyer convention that we had dragged him to. Finn nodded solemnly as we explained that if he wanted to play with the other kids at the convention, he would have to say that he was five when asked his age by the camp counselor managing the check-in desk. As we waited in line, he gave off the quietly confident air of the star athlete who has been entrusted with the final play of the game and is guaranteed to deliver. So it was a complete and utter shock when we got to the front of the line and, without even being asked his age, Finn said in a ringing voice: “I’m Finn. My daddy says that I’m five today, but I’m really four.” I’m told that many parents feel like they suck at parenting. But I suspect that I feel that way with a lot more regularity than the average mom. 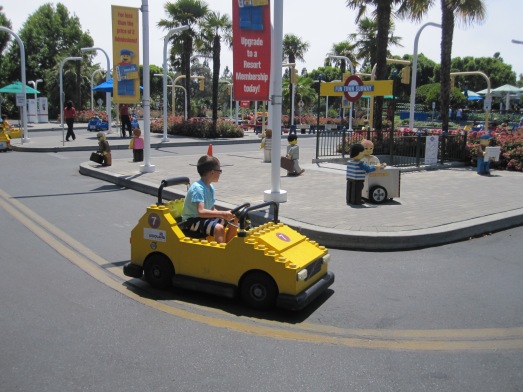 This time around, when asked to lie about his age, Finn made the play and won the game.  And the win was particularly impressive because Legoland doesn’t station the average carny at the Volvo Driving School.  Only the best and brightest are selected to operate the marquee attraction, and these ringers have clearly been trained that when sufficiently intimidated, a child will always revert to the truth.  Completely ignoring my ingratiating smile, the ride operator crouched down next to Finn and fixed him with a stern expression.  “How old are you, little man?”  But Finn rose to the test.  Motivated by the desire to drive a tiny plastic car, he shouted “I’m six, I’m six!!”  And then, he was off.  To the car of his choice, for two minutes of driving bliss.

As he watched Finn lap the track, Tom’s happy smile said it all.  It was a great day.  I didn’t even lose my composure when some punk kid doused me with a water cannon on a pirate ride at 10:00 AM, completely deflating my carefully voluminized hairdo and soaking my jeans.  Anyone who knows me, knows that there was serious magic that day at Legoland if I was able to enjoy the day despite looking like I had swum to the park from Japan.  But ultimately, I just didn’t have the heart to ruin the day for Tom.  He had planned and organized, and for that, I was grateful.  As we left the park with exhausted kids in tow, we looked at each other and locked lips in a passionate kiss.  Victory gets us hot, and we’d done it—we’d won Legoland.