my kingdom for a good photo

I’m not going to lie.  There are few things that I love more than a good photo of me.  A good photo is a thing to be treasured.  A good photo can get you through tough times.  Like after weight gain or a bad dye job.  You can hold a good photo, feel its weight, cling to it as you would a dinghy in a rough squall.  A bad photo, particularly one on a driver’s license, can ruin your life afresh every time you look at it.  I took my driver’s license photo two months ago with a very cruel DMV employee who insisted that I push my bangs completely off my face.  For the record, my forehead hasn’t seen the light of day since approximately 1988.  I look extra weird in the photo because I am fighting back tears.  Luckily, I only have to look at it every day for the next two years.

I don’t care if saying all this makes me sound shallow.  Even the deepest rivers have shallow banks.

I’d take more photos of myself, but it’s always tricky to get the proper distance in the frame when you’re holding a camera and pointing it at yourself, seeing as how you are limited by the length of your arm.  It’s also difficult to achieve the proper expression when you’re taking your own picture.  I look best in photos when I’m caught unawares, and it’s mighty difficult to produce the emotion of surprise when you’re engaging in self-photography.

So, if not me, surely my husband would be happy to do the honors, right?  Wrong.  I am somewhat embarrassed to admit that after family and money, the next most contentious topic in our marriage is Tom’s complete lack of interest in taking photographs of me.  I know he likes me.  I know he finds me physically appealing.  And yet.  Lest you think my desire to be photographed is wholly a vanity thing, it’s not.  I have kids, and I would like them to be able to look back when they are older and see that their mom spent time with them, took them places, was a physical presence in their lives.

The issue has lodged firmly in the craw given that I make it a priority to document Tom’s involvement in his sons’ lives.  Tom is an awesome dad.  No question.  But if you saw the photos on my iPhone, you’d swear that he was the best dad in the history of dads.  I take photos of him doing everything with my kids, from making pancakes to nightly baths, to bike rides and soccer practices.  I document everything.  To someone (like me) who has a very poor memory and keenly feels the lack thereof, photographs feel imperative, as if the moment didn’t happen at all unless there is a photograph to prove that it did.

So why not just ask Tom to take photos, right?  Because.  My pride and inner sense of justice balk at the idea that I should have to ask my husband to take a photo of me.  He should WANT to take photos of me, all the time!  More critically, in my experience, asking someone to take a photo of you almost always results in a bad picture.  The person asking (me) is resentful.  The person taking the photo (Tom) is annoyed/defensive/panicked, and isn’t going to take the time to line up the perfect shot.  So you end up with pictures like this. 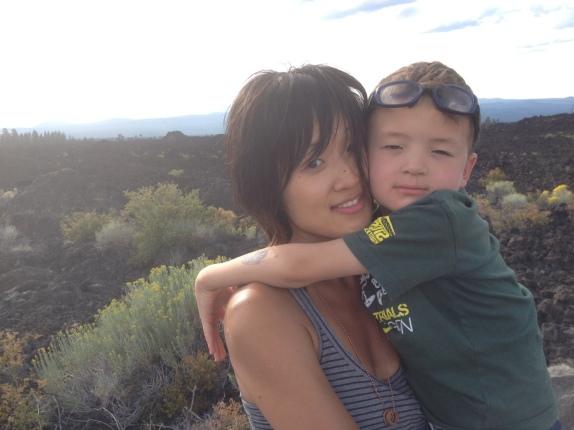 I mean, what the F am I supposed to do with photos like these?  Looking back on these later in life, my kids might think their mom had greasy hair and fat upper arms (first photo), or that she had greasy hair and was too tired to love them (second photo), and I can’t have that.  I can’t post these on Facebook.  In other words, these photos are completely worthless.  And these are the kind of photos I get almost every time I ask Tom to take a photo of me.

I never stop trying though.  Sometimes when we’re doing something particularly photogenic with the kids, I will make Tom stop to pose for a bunch of photos, assuming that he will at some point stop and say, “Hey, let me get a photo of you!”  Yesterday, we went on a long bike ride with our kids on the banks of the Deschutes.  Every turn opened onto a scenic vista of water, sky, and grass.  I couldn’t confirm it because I hadn’t packed a mirror in the Burley, but I sensed that my hair was looking good, given the speed of the winds.  I knew I was tan, which always works well in photos.  My kids were looking as cute as it is possible for children to look.  It was practically criminal that photos of us were not being taken.  And YET.

I made it about 45 minutes before I pulled alongside Tom and demanded to know why he hadn’t offered to take a single photo of me with the kids on the ride.  Tom responded by immediately turning his bike around and leading me on a redo of the entire loop so that he could take photos of us, but by that time, I knew it wouldn’t be the same.  I’d look angry or bitter in the photos, despite my best attempts to shine for the camera.  And worse still, I would feel embarrassed, and pitiable, that I needed a photo so badly that my husband would need to repeat a 45 minute bike ride to get it.

But then, a great thing happened.  Finn asked to take a photo of us.  Seeing my five year old balance the phone in his hands and cock his head to line up the shot made us smile.  And the photo was good.  I looked at Finn with newfound respect, and with hope for my future in pictures.