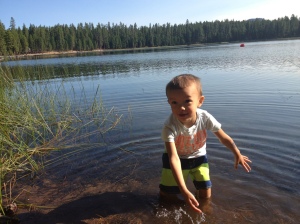 It’s late August, and my will to live is pretty tapped.

Why so down, you ask? Because I’ve been having fun with my boys while they are out of school. Doin’ boy stuff. I love boy stuff. But multiple consecutive days of boy stuff will leave you drained of all energy, turning you into a pale carcass devoid of blood and discernable life force. At this point, Tom and I are like two undead zombies, shuffling aimlessly through the rooms of our house and occasionally walking headfirst into a wall. Yesterday, I stepped on a Lego (a windshield piece, which will cut you like a mofo) and I didn’t even feel it.

So how’d we get here? Hubris. I thought I could do all that kid stuff, collect some blog fodder on the way, and return to work tan and refreshed. But everything we planned ended up being so much harder than expected. Like fishing. What could be easier than lake fishing on a warm summer’s day? Well, if a toddler is involved, I can think of a few things that are easier, like deboning a raw chicken with a butter knife, or catching a fly with chopsticks. Tom and Finn had big plans for the trip, with their fishing rods and their worms. Tate and I were unwanted from the get go, even before we got to the lake and Tate started making more noise than a charging rhino.

Who knew that silence was so integral to fishing? Everything Tate did, made noise. He wanted to touch everything in the tackle box and rattle the tackle around. He wanted to splash in the water where Finn had cast his line. He wanted to throw rocks. I finally resorted to distracting him with food and set him on the bank with a bag of Cheetos. You know where this is going. I have never heard anyone eat anything so loudly in my entire life. Who knew those little teeth could crunch so hard? We all flinched with Tate’s every bite, while the fish all fled to the opposite side of the lake. Poor Tom and Finn. No fish were had that day.

Even low key stuff can turn stressful with two boys. Tired of worrying about accidentally drowning Tate in a regular pool, we made our way to a kiddie pool. One foot deep, lots of sun, lounge chairs for Tom and me. Finally, relaxation! For seven minutes that is, until I heard a baby screaming, and looked up to find Finn playing shark and stalking toddlers. The moms of Finn’s victims returned my sheepish smiles with expressions so frosty I’m surprised I didn’t turn to stone. And who can blame them? It was August for them too. 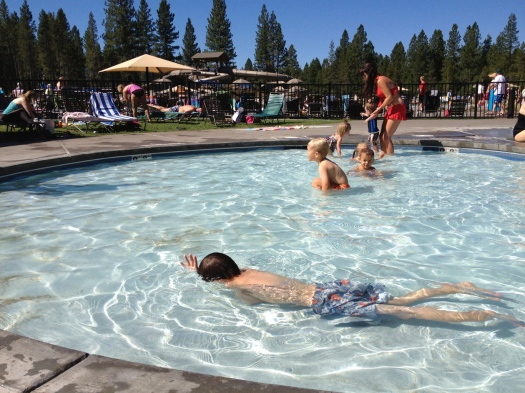 There’s a week of summer left until my kids go back to school. Finn’s in zoo camp and Tate is home with my cousin Lisa, who moved in with us last week. Here’s our text exchange from earlier today. 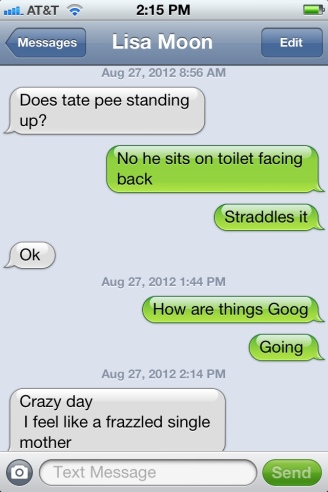 I should feel bad for her, but all I can say is, better her than me.

Tags: back to school, raising boys
From: guys, humor, kids, relationships
← my kingdom for a good photo
skin deep →
17 Comments Post a comment