I still think bike commuters can be obnoxious. But I admit that I have long coveted a bike. It’s just worked out that every time I want to buy a bike, I don’t have the money, because I need it for other trifles, like heat, and water.

I started getting serious about a bike after spending $120 on a shitty rental over vacation. Buying a bike made a lot of sense. In Portland, the bike lanes are wider than the car lanes. Finn rides like a fiend, and is always asking why his parents walk so slow. I shop for groceries European style, which just means that I can’t predict what I want to eat in advance, and end up going to the store daily–a trip that would be more fun on a bike. But the last straw was when my genteel cousin Emily and her boyfriend Kevin bought a tandem. They have been riding jauntily around town toting baguettes and having impromptu picnics. I mean, I can barely picture Em OUTDOORS. That settled it. I was getting a damn bike.

Having made the decision, I perked up, as I always do, at the thought of buying something. But it’s been a slog. I’m usually an efficient shopper. I don’t equivocate, and I don’t waffle. But with bikes, I was like a retiree with all the time in the world—puttering around the shop, kicking tires, accidentally knocking bikes over, and asking annoying questions like “Can I put a bell on this? and “Why is this here bike so big?” I wish I had better questions, but I had no idea what to ask. When friends would ask “what type of bike” I wanted, I got tetchy. What the hell did they MEAN what kind of bike? The kind with two tires, a seat, and some handlebars. Duh. But I had to answer, and unfortunately, all my answers sounded really dumb. “I want a bike that won’t make my crotch sore.” “I want a bike that comes with the cool orange bags that hang on the back.” “I want a bike with medium fat tires.” 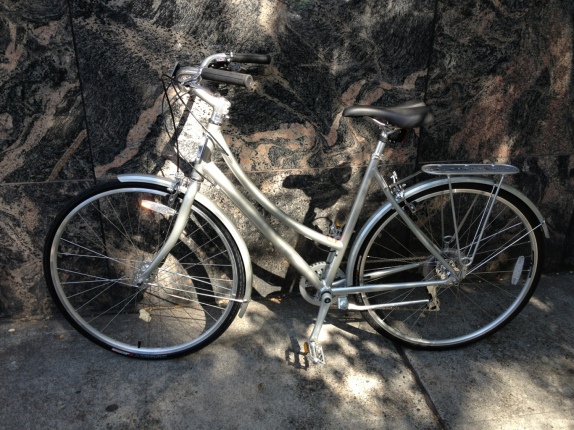 an early contender: the globe daily 2

Anyway, the technical stuff was besides the point. I wanted the bike for my kids and groceries, but my priority was to avoid buying an uncool bike. I’m no Jay-Z, but I like to think I at least know what’s not cool. With bikes, I had no idea how relatively cool or uncool my options were. But make no mistake, you can’t go into a bike shop in Portland and ask for a “cool” bike. I know this because I did just that at River City Bikes and the salesperson visibly cringed, which looked painful with the eyebrow rings. My general impression of bike shop employees, btw, is that they exist to make you feel lame and under-pierced.

I couldn’t even rely on brand names, because I have no idea what brand names are cool in the bike world. Don’t give me any of that BS about brand names not being important. Brand names are important. To argue otherwise is to mess with the penultimate value system in my life, so I’d appreciate it if you didn’t go there. I didn’t like the sound of some brands: “Giant,” “Surly,” “Globe,” “Cannondale.” Finn has a Trek and that sounded ok, but who wants to ride the same bike as their kid? It would be like buying a car made by Tonka, or Stride Rite pumps. I liked the sound of other brands: “Linus,” “Jamis.” I thought the brand “Specialized” sounded pretty special until a friend implied that Specialized is the Gap of the bike world. The Gap!! I didn’t want the Gap. I wanted A.P.C.

I knew a couple other things. I knew I didn’t want a girl bike—which, I was surprised to learn at Clever Cycles, is not the technical term for such a bike, which is instead known as a “step-through.” I wanted the crotch bar. Gotta have the crotch bar. To me the crotch bar is the difference between having curly streamers coming out of your handlebars, and not. Speaking of handlebars, I also knew that I didn’t want those tall, curvy handles that you see in old French movies.

But I was weak. Presented with curvy-handled, step-through options, I was tempted. A beautiful Linus Mixte 3-speed came in a color called “Rosewood,” a deep burgundy that called to the very core of my being. The salesperson assured me I could ride in a skirt. I nodded in appreciation, forgetting that the last time I wore a skirt in my downtime was…never. I wanted to buy that Linus, bad. And yet, something felt wrong on my test ride. I felt too upright, like a bear on a tricycle. Worse, I couldn’t shake the annoying feeling that I should be wearing mime makeup and handing flowers to passerby. It was cute, but I didn’t want cute. I wanted utilitarian. Functional. Something I couldn’t easily fall off of. A Linus might be in my future, but first, I needed to find out if I could really ride a bike.

In the end, I bought the cheapest option–the first bike I tried, a Globe Work I, in plain black. Globe is owned by Specialized, but I prefer to think of the Globe as my Piperlime bike, not my Old Navy bike. The bike felt good, and solid, like I could run over it with my car—just saying—and it might still be ok. I jazzed it up with a seat for Tate, in chartreuse. With the child seat, basket, and bike lock, the whole thing weighs approximately 120 pounds, but it’s ok. I don’t plan to go up any hills.

If the biking thing sticks, I’m getting this dream helmet next. My boss Keith, a cyclist, helpfully suggested it because he knows that my primary anxiety about riding a bike is helmet hair. A helmet that’s really a scarf! Brilliant. Now I just need to save the $700.

Anyway, if you see Tate and me on the road, give a honk! Just don’t make any sudden movements, because we are newbies. So maybe a light, non-threatening beep. Or maybe just flash your lights. Or maybe, just wave. Or maybe, just ignore us.

i guess finn needed to pee