We just got back from a 24-hour trip to Oregon wine country. With best friends. And no kids. Amazeballs.

I love wine. But I’m not naturally suited to wine tasting, for two reasons. First, I have really low alcohol tolerance. I can go from cold sober, to drunk, to deep slumber, in about 35 minutes, given the right conditions. Second, I don’t have a refined nose. I can tell when wine is corked. Beyond that, it’s all kind of a mystery. Which is fine, because for me, wine is a means to an end. I like the feeling I get from a glass of wine. Like I can feel a knot inside of me unraveling. I don’t need my wine to be great. I just need it to be wine. In that way, wine, for me, is like pizza. When I want pizza, even Tostino’s gets the job done. As an aside, the last time I baked myself a Tostino’s, I was alarmed to read “Now Featuring: Real Cheese” on the outside of the box. What, exactly, were they using before? Man. It’s a good thing I’ve only eaten approximately 7000 Tostino’s pizza rolls over the last 35 years.

Anyway, low alcohol tolerance and an undiscriminating nose are great for drinking your Penfolds Shiraz at home in front of the TV. But not so great when you are wine tasting. Wine tasting requires that you stand in front of a wine steward and find something different to say about each of the five different Pinots they pour for you. And that’s where I run into trouble. Invariably, when pressed to describe a wine, the best I can come up with is, “That’s easy-drinking.” The line is always a safe bet. Because wine, like other alcoholic beverages, is generally easy to drink. But once I’ve said that, I have nothing, and am left to drink in silence, making thoughtful faces as if the emotions I’m feeling about the wine are too complex to distill into words. 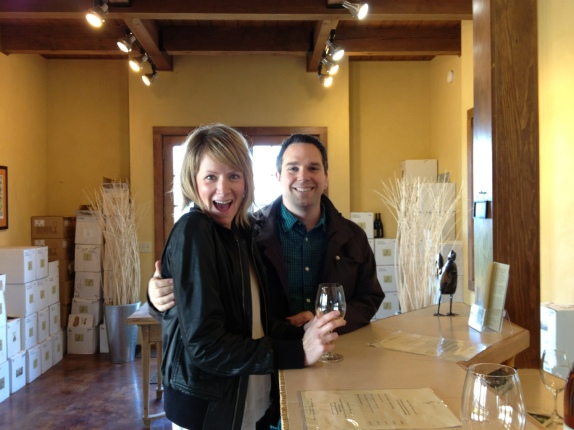 Despite my natural handicaps, I had a blast tasting wine, because I was with Tom, Ethan, and Linds. It’s been a tough fall for the four of us. New jobs, new classrooms for our kids, family leaving, family passing away. The four of us blew into the first winery with the desperate air of convicts who had just broken each other out of jail and who expect to be dragged back at any moment. No elixir could have tasted sweeter than that first glass of wine, knowing that my children were miles away and incapable of finding me. I felt giddier and lighter with each glass. By our third winery, I was floating six feet off the ground. I was happy. So happy. To the outside world, and to the camera, I apparently just looked insane. Who knew. 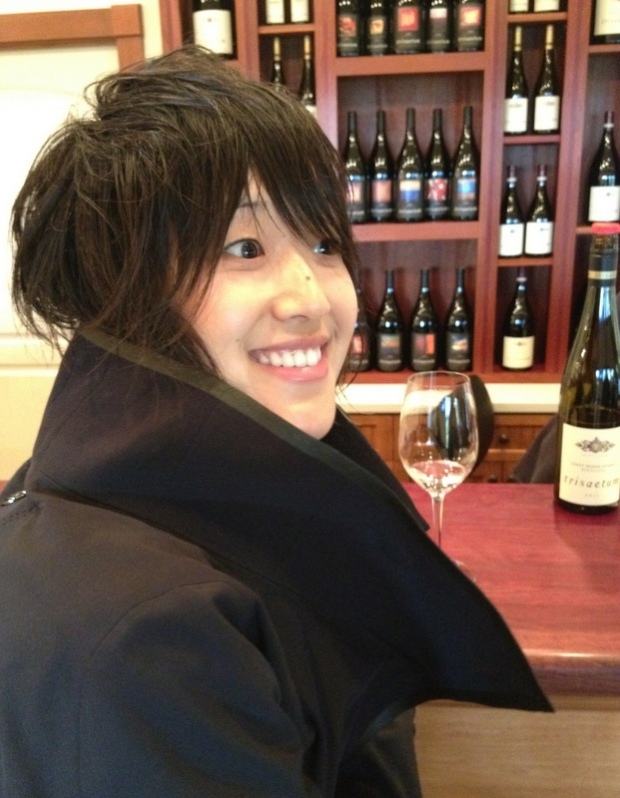 But that’s the nice thing about getting away with the friends who know you best. They understand you. They don’t make fun of you when, desperate to sound like you know something about wine, you ask the wine steward whether your Riesling is a kabinett and the wine steward answers that she wouldn’t know because kabinett is a designation used only for wine made in Germany. Ugh. I, in turn, understood the gravity of the situation when Linds woke me up at 7:30 AM to ask in a scary, serious voice whether I’d brought a hair brush. She sounded so panicked that I thought something really bad had happened, like she’d forgotten her hairspray. No one gave Ethan a hard time when he asked for his burger at lunch without the bun. Tom just asked the waiter if he could have Ethan’s bun (“It’s a BRIOCHE bun, Ethan”), without missing a beat. And no one gave Tom a hard time when he revealed at the first winery that he didn’t “really like wine anymore,” and hadn’t, for months, and then spent the rest of the day surreptitiously dumping out the wine he was offered.

All in all, the weekend was so perfect that I didn’t even mind when I got home and Cuz casually mentioned that Finn had asked her some questions about death while we were gone, and that she had done her best to explain the difference between burial and cremation, and that Finn kept asking questions when she said that some people chose to get “sprinkled over mountains” after they died, and that eventually she had to stop answering because she didn’t know how to explain cremation without mentioning that you burn the body. I’m going to worry about all that tomorrow. Because right now, I’m still floating. Wine is groovy. Getaways are groovy. And having family like Cuz who love your kids enough to give it to them straight, and friends like Linds and Ethan who you love like family, is the grooviest of all.