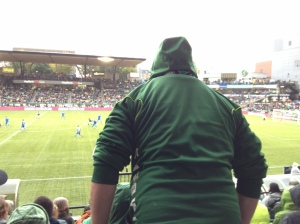 Tom and our friend Ethan have season tickets to the Portland Timbers, an MLS team. If you don’t know who the Timbers are, you are probably, like me and 98% of the American populace, ambivalent about major league soccer in this country.

Today was the last game of the season, against the San Jose Earthquakes. When Ethan can’t go, Tom likes to take Finn. But Tom was in Seattle for business, and Ethan had just returned from a trip, so Finn and I put on three layers of clothing and trudged out into the rain to watch the match.

Finn had me stressed long before we got to the field. When I told him I was going to take him to the game instead of his dad, he very politely, but very firmly, declined. As the kid loves nothing more than Timbers games, I was totally offended. After I cajoled him into going (“Why don’t you love Mommy as much as Daddy?”), he spent all morning looking anxious. “Mommy. Do you know any of the Timbers songs?” I was aware the Timbers fans chanted different songs during the game. I lied and told Finn that I did. “Which one?” Oh shit. “Uh, the one that goes like this: ‘Portland Timbers, here we go. Portland Timbers, here…we go?” Finn stared at me, unblinking, and then shrugged. “I guess, Mommy.”

On the way to the game, Finn kept asking if I knew where the seats were. So much so that I kept looking at the tickets, assuring myself that the seats were indeed numbered. I felt victorious when we sat down in our seats with time to spare. Finn immediately broke out his program to study the lineup. I took advantage of the extra time to use the vanishing batteries on my iPhone to zoom in on the deep stretches of the visiting team. And then, with the whistle, we were off.

I expected I’d have to entertain Finn for the game, but he wanted nothing to do with me. You know that boring relative who invites you to games but you never want to go because he’s so into it that he keeps his own stats and brings a transistor radio to listen to game commentary? Finn is going to be that guy one day. He wasn’t interested in chit-chat, least of all his mom’s. His eyes were glued to the players, only looking away to match up new players to the photos in his program. When he started cheering and I took his lead to contribute some “woo-hoos,” he turned and pressed his index finger to my lips and mouthed a silent “NO.” When I asked him what you call it when there’s one guy in front of the goal and he gets to take a shot with no defenders, he rolled his eyes so hard I thought they’d get stuck in the back of his head.

At some point, I got tired of trying to look credible to my almost-six-year old, and just took in the surroundings. Tom and Ethan’s seats are square in the middle of a tight nest of hecklers who know their art. The two women who sit behind them look like they got lost on their way to their knitting circle, but nonetheless managed to provide blistering commentary throughout the entire game. In my head, I named one The Timekeeper, and the other, Pancake Patrol. This is what they sounded like, for the full 90 minutes:

Pancake Patrol: “Look at this guy. This guy is a flopper. Just look at him flopping around!!”

The Timekeeper: “He’s just wasting our time. Wasting it!”

Pancake Patrol: “The whole San Jose team should just play laying down. Because all they do is fall down. Stand up!! FLOPPERS!!!” 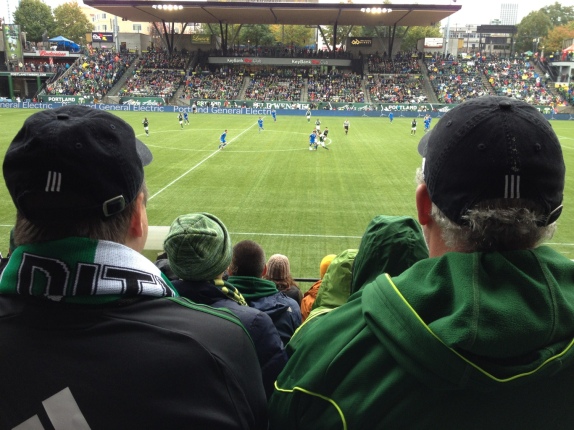 The Timekeeper and Pancake Patrol, while annoying, were completely benign compared to the two guys who sit in front of Tom and Ethan’s seats, who I have named Chaz and Chazzers. Chaz, on the left, is the milder of the two. Chazzers, on the right, looks normal, but is insane. During the game, he screamed nonstop at the referee on our side of the field, calling him “Pussy,” “Bitch,” and, for a change of pace—“Pussybitch.” It would have been an entertaining experience, this hysterical misogyny—but for the fact that this is how close Chazzers sits to Finn. 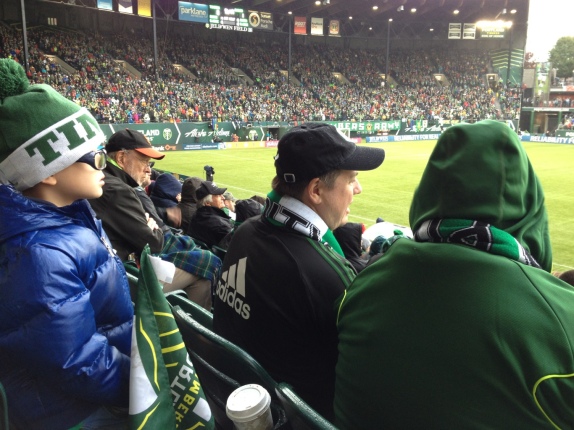 I don’t know which was more alarming: Chazzers, or the fact that Finn seemed completely unfazed by the language, which he’d clearly heard before. I mean, how ironic that I’d been biting my tongue at home for “damn,” when Finn’s been hearing “Pussybitch” all season.

We had fun, my Finny and I. I got to escape my increasingly shrill 3-year old for a few hours, and it was awesome watching Finn develop his own passion for the game. And let’s be honest, from the perspective of a 35-year old hetero female, there’s a lot to appreciate at an MLS game. The legs. The sweat. The aforementioned stretching. I felt like I needed a cigarette after the game. 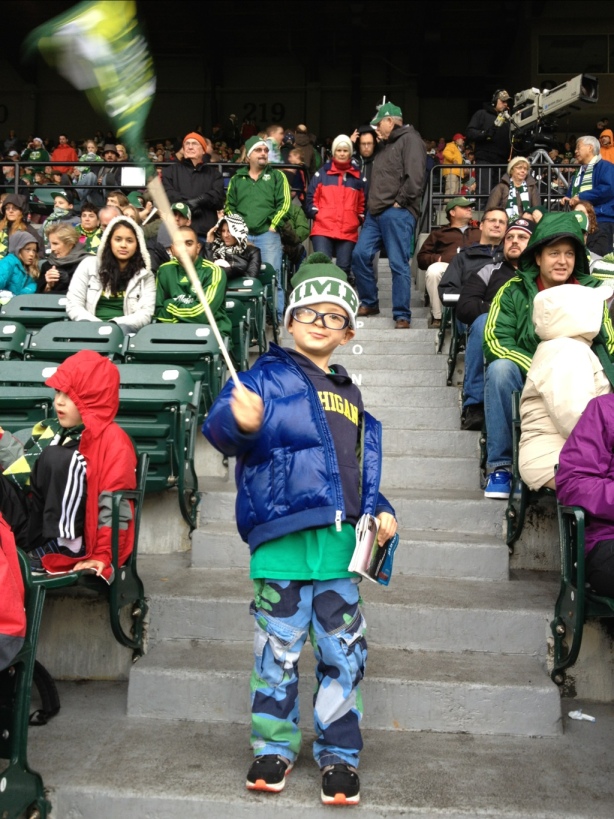