I’m sitting in the lodge at Timberline, having dropped my kid off at ski school an hour ago. Now I’m waiting for him to actually leave the building so I can hit the buffet. I’ve already strolled by the ski school entrance 17 times to check on the ski schoolers, who are all corralled in front of a TV, which we have two of back at home. The check-in guy, who greeted me warmly at 8:45, told me he liked my Timbers zip-up at 8:55, and assured me that “we pee before we ski” at 9:15, now has his eyes trained on me as if I mean to steal a child that isn’t mine.

What the hell are they doing? This day is costing me like $40 an hour, if you factor in gas and the babysitter I’ve paid to sit at home with Tate. But breathe, I tell myself. This is a primo opportunity to work on my new year’s resolution of not rushing. I’m always rushing. I can’t finish one thing without being stressed about the next. I’m the kind of person who puts down her fork at lunch and asks what’s for dinner. So, less rushing in 2013. Less rushing for myself, less rushing of Tom, less rushing of (and on behalf of) my kids.

Then again, I can start on all that tomorrow. Why ask me to check my kid in at 8:45 if no one is intending to ski until 10:15? WHY? I left Portland at 7:15 to get here with 10 minutes to spare. As usual, my meticulous planning and perfect execution are being completely foiled by someone else’s low standards and rank incompetence. Whenever I complain about this type of thing to Linds, she says it’s because I’m so high-functioning. I brush her off, but I totally agree. 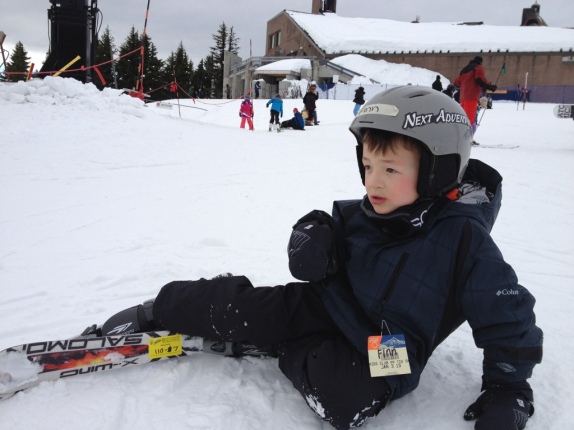 I tell myself that it’s worth the aggravation to get Finn up on skis while he’s too young to know better. The older you get, the more you realize that the concept of skiing as a leisure activity is totally insane. When you’re young, you hear about people hitting trees and dying and you laugh with the brashness of youth and think, “no way is that happening to me.” When you get older, you start thinking about statistical odds and probabilities and realize that if Sonny Bono can die skiing, you are as likely a victim as any.

It’s important to learn early because when you’re young and you fall on skis, it’s not a big deal. You get all snowy and your skis fly off but they don’t weigh much, and it’s all very inconsequential. When you’re an adult and you fall on skis, things are totally different. The snow, which seemed so fluffy and happy when you were a kid, now seems hard, sharp, and cold. So hard, sharp, and cold, in fact, that you want to avoid falling so desperately that you ski tentatively and end up falling even more. Since you now create more velocity as an adult, when you fall, your skis snap off 30 feet up the hill from where you stop tumbling, so that you have to hike up in shame to retrieve your skis. This doesn’t happen to me often, of course. Only when I ski under a chair lift packed with cruel teenagers.

When you’re an adult, you stop making fun of ski helmets and start buying the ones with the most padding. You get muscle aches so distressing that you spend the next day worrying that you tore your ACL, wherever that is. The snow that seemed so fun when you were a child now creeps its way up your sleeves and down the back of your pants, melting down your crack and pooling in the crotch of your underwear.

When you’re older, in addition to the dangers faced by your own body, you also have the bodies of loved ones to worry about. Last year at Mt. Bachelor, Tom showed up 45 minutes late for a rendezvous at the bottom of the slope. After the first 25 minutes I hiked to Ski Patrol and had his name blaring from every PA system on the mountain. When he finally skied down to me, he had snowy formations hanging off his face and looked like he’d gotten down the mountain by rolling. And he was wild-eyed, like he’d been through something really traumatic. He basically looked exactly like this, except with ski clothes:

Aware that he was 45 minutes late and in deep shit, Tom went for the nonchalant approach. “What’s up, babe?” I looked at him, said not a word, and erupted in tears. From anger, partly, but mostly from relief. Because for that last half hour or so, I truly thought he might be dead. And then I’d be stuck with the kids on vacation by myself.

So. Why ski at all? Because when it’s sunny and there’s fresh powder that isn’t too deep and you are carving turns and you can feel your toes and fingers and your underwear is dry, it’s lovely. Nothing better. Plus you can technically only get to apres-ski if you ski first. And apres-ski is my favorite thing in the world after Korean barbecue. The hot tub, the wine, the car heaters on full blast as you massage sensation back into your extremities. That feeling of warmth, of coziness, of feeling like you had a DAY–it’s worth whatever your miserable body paid to get there. 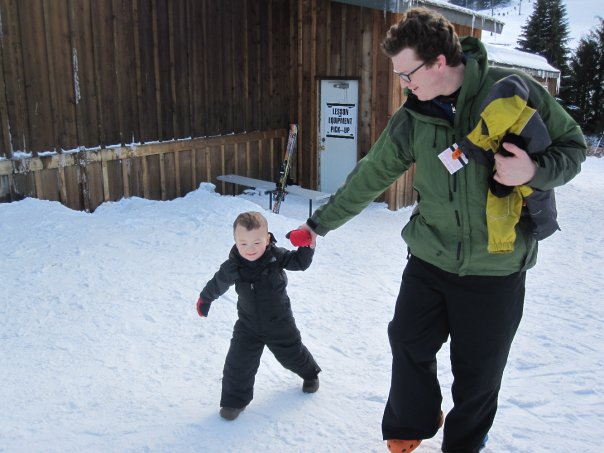 finn at three, with dad