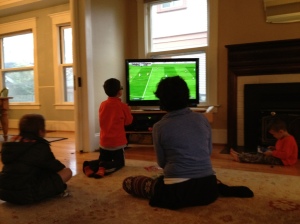 I haven’t been writing as frequently because, as I’ve mentioned in my last few posts, I’ve been busy surviving my kids’ winter break. They’re back in school now. The alternating bouts of ennui and frenzied activity that made up the past three weeks have died down into something more regular, more sane.

But before it disappeared completely, this winter break left something pungent in its wake. The afternoon of the roller-skating debacle, we drove home from the rink around 2:00 in the afternoon, with a car full of family and nothing to fill the time until the inevitable Chipotle run at 5:00. I looked over at Tom in the passenger’s seat, and saw desperation in his eyes equal to mine. “Let’s do it,” I said. “Let’s get the Xbox.”

We’d been arguing about getting a video game system for months. Tom grew up on a country road with few neighbors, and no game system at home. The way he describes it, it is an absolute miracle that he did not grow up to be an ax murderer given this deprivation. When he got to college, he apparently suffered severe sociological consequences when his frat brothers wouldn’t let him play video games. “They’d never let me play because they said I didn’t know how,” he’ll tell you, in a tragic and aggrieved tone that is totally at odds with the ridiculousness of the statement.

As silly as Tom’s fear-mongering was, it worked. I started to worry that if I never let my boys play video games, I would be inhibiting their social development.

So we got an Xbox Kinect. Waiting in line at GameStop, I tried not to touch any surfaces and watched as the cashier hollered at a woman standing in line. “Ma’am? You alright with your child playing ‘Call of Duty,’ rated M??” “You bet,” she hollered back, while cracking her gum. I clutched my Xbox tightly to my chest and promised myself that my kids would only play sports games, and that this was the only time I would ever need to be physically present inside a GameStop.

We bought a few games with the system, but really all anyone has been doing is playing FIFA 2013. The first time Tom played the game, he stood in front of the TV and stated without irony that the game was “the best thing that has ever happened to me.” I waited for him to look back at me with his sheepish grin, adding on the usual caveat (“except for you and the boys!”), but I waited in vain. He never looked back at me at all. Because I’d already lost him to FIFA.

That first session, Tom and Cuz played for like 90 minutes and scored not a single goal between the two of them, even with several rounds of penalty kicks. A penalty kick is when you kick on the goal with no one in front of you but the goalie, who in this case, is not even a real goalie, but a computer generated figure that moves with all the grace and agility of Frankenstein.

But they’re better now, because they play almost every night after the kids are in bed. They’ve taught Finn and even my Mom, although it’s unclear whether either Finn or my Mom know how to work the controllers. Last weekend, Finn played with his friend and neighbor Owen, and Owen beat him 8-1. “At least Finn got one goal,” I whispered to Cuz. “No,” Cuz whispered back, shaking her head. “Owen accidentally scored on himself.” I thought that simply buying the Xbox would be enough to assure my sons’ future social ascendancy. Watching Finn and Owen, I realized that I would now have to worry about my boys being good at video games. I stood up abruptly. “Owen, it’s time to go home,” I said. 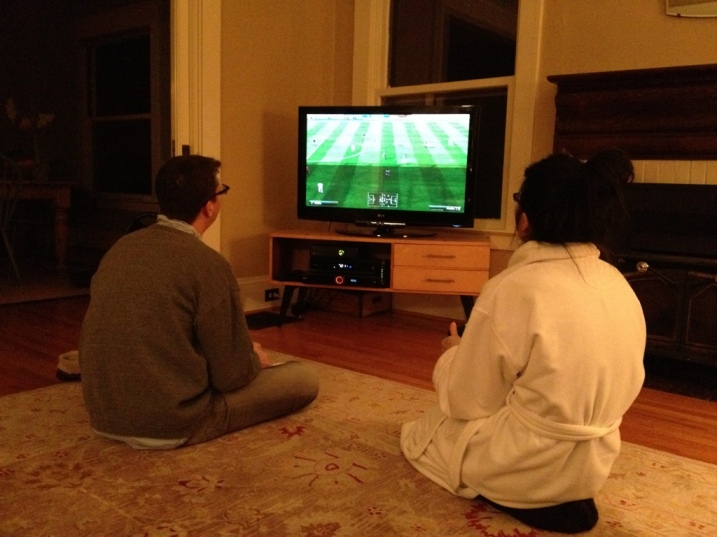 At least Finn is learning sportsmanship, even if he sucks at FIFA 2013. I overheard Cuz and Finn talking to one another in the car last week. “You’re not good at FIFA, Aunt Bora,” said Finn. “What are you even talking about? I scored on you the last game,” Cuz retorted.

“Yeah, but it was a cheap goal,” Finn muttered from the backseat.