dry, with a twist

I’m a very poor drinker. For years my friends have teased me about my low alcohol tolerance, just because I can’t hang with the Big Gulp size containers of wine and spirits that they are wont to consume. If my friends sound like huge lushes, it’s because most of them are.

If I drink too fast, I turn red, because I got the Asian Flush gene from my dad’s side of the family. It’s not great for photos when your face looks like a throbbing penis. Also, if I drink too fast, I fall asleep. Like, at the table. And I generally don’t like to drink liquids, including water. For this reason, drinking beer to me feels like being stretched on a rack, which I’ve tried to explain politely to my friend Patrick at his annual beer dinner, which involves seven courses of the stuff. The last time I tried to decline a beer at his dinner, Patrick pushed my glass of thick brown beer towards me and said something along the lines of, “Drink it, or you don’t get any food.” That’s what it felt like, anyway. Since I’m here, I’m just going to out myself: Patrick, your beer dinner challenges me, but I love you anyway. I’m glad that’s off my chest.

So drinking: not my thing. But if you read this blog with any regularity, you know I’m all about improving myself. If I could train myself to compost and wear Spanx, couldn’t I train myself to be a better drinker? I wanted to be able to have a full glass of wine at dinner, for a change. Maybe even after a pre-dinner cocktail. To kick off my training, I started drinking sake at every opportunity. Sake is a great drink because, at least for me, the buzz comes on slowly and levels off nicely. More importantly, sake doesn’t make me fall asleep and it doesn’t make me talk really loudly, which is another unfortunate side effect to my drinking. After three months of sake drinking, I felt ready to move onto cocktails. 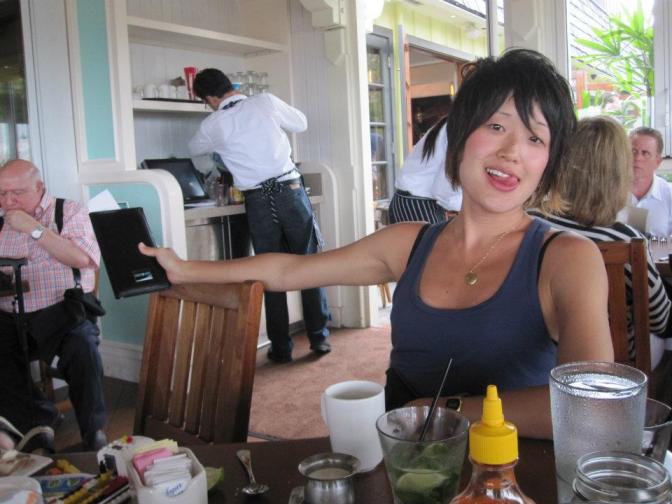 about halfway to margaritaville

Ah, cocktails. I knew so little about them that it was scary. What I did know was this: I wanted to know what it felt like to look forward to a Happy Hour for something other than the discount sliders. And I wanted a signature drink. Something I could rely on in the face of intimidating cocktail menus, a drink that said something about me and my choices. Tom likes to order a scotch, neat, except in summer, when he sucks down more mojitos than you might see during a season of Jersey Shore. I wanted Tom’s confidence and certainty in his beverage. But where to start?

Out at dinner with friends during a weekend away, I perused the drink menu and landed on a dirty martini. Right then and there, I decided that the martini would be my drink. I liked the shape of the glass and the martinis I’d had before had all tasted refreshing. I was also pretty certain that most bars served them. When I ordered my cocktail, Linds snickered. I tamped down my annoyance and doubled down on my will to finish this drink.

When the waitress brought the martini, it was so cloudy that I couldn’t see through the glass. It also had more olives in it than I thought appropriate for a food item that wasn’t pizza. And the taste!! It took all my muscle control to stop my mouth from forming a rictus of pain when I took my first sip. I didn’t want my friends to see that I found this drink revolting. How could this be my signature drink if I couldn’t actually drink it? Get your shit together, I told myself. It’s just pickle juice. You LIKE pickle juice, when it squirts out of a pickle. I finished most of the martini, and wished I could spike my glass onto the floor in victory. My martini training was solidly underway.

The next week, I decided to take my new self, my martini self, out for a spin. I wouldn’t bother with the drink menu, and instead, I’d order my martini as if I’d ordered one for years. “A martini, please,” I told the waiter. And then, it all went terribly wrong.

“Gin or Vodka?,” the waiter asked. Gin or vodka? I shot the waiter a silent, beseeching look, a look that said, “Please just decide for me–these people think I’ve done this before.” The waiter either didn’t understand my expression or decided that humiliating me was worth the sacrifice of a huge tip. “Vodka. I like vodka,” I said, stupidly. “And what KIND of vodka, Miss?” I started to panic in earnest. By this time, friends from the other end of the table were looking down at me, because I was slowing down their own drink orders. I couldn’t order Absolut, could I? Stoli-something. What was the something?!? I searched my brain for vodka ads I’d seen in Vogue and US Weekly. Sean Combs had a vodka, but mercifully, I couldn’t remember the name. Svedka–I had seen an ad for that. But the ad had featured a robot, hadn’t it??—that probably wasn’t a serious vodka. I felt that I was on the verge of tears.

Eventually, my friend Chris saw my distress and intervened, by ordering his own drink while I sat there sputtering. “A Ketel One, dry, with a twist.” I looked at him with gratitude, and told the waiter, “I want that too.” The waiter smirked and sidled away. When my drink came, it was perfect. Bright and clear, with no real taste to muddy the food that would follow. And most importantly, it looked to be only about four ounces in volume. By that point in my training, I felt reasonably sure that I could handle four ounces.

Last night at my mom’s birthday dinner, I ordered another martini. Before the waitress could even ask how I wanted it, I said it just like I’d watched Chris say it. “A Ketel One, dry, with a twist.” The waitress gave me a reassessing glance. That’s right, my eyes told her—this wasn’t my first time on the merry-go-round. It was, in fact, my third. So suck on that, my eyes said. Then she carded me.

Doesn’t get much better than that.