clothes in my house that refuse to die 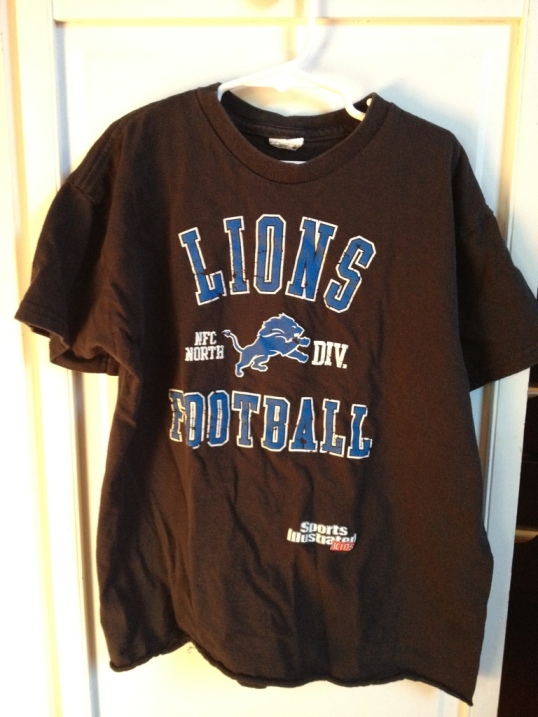 I have a small to medium-sized phobia of black cotton t-shirts. Even the best black cotton shirts are bound to fade, and once your black t-shirt fades, you might as well cut the sleeves off that bitch and pull on some jorts. Needless to say, Finn loves this shirt. He likes to pair it with his too-short sweatpants and a pair of striped knee socks from H&M, and the whole ensemble cuts me like a knife, every time. If this shirt had cost money, I would have burned it long ago. But unfortunately, it was free, as Tom likes to remind me. It came with Finn’s Sports Illustrated Kids subscription, and Tom carefully checked the box for the Detroit Lions, and the rest is history.

I’ve actually tried to throw this shirt away. Finn found it in his trash can and lovingly folded it back into his drawer. 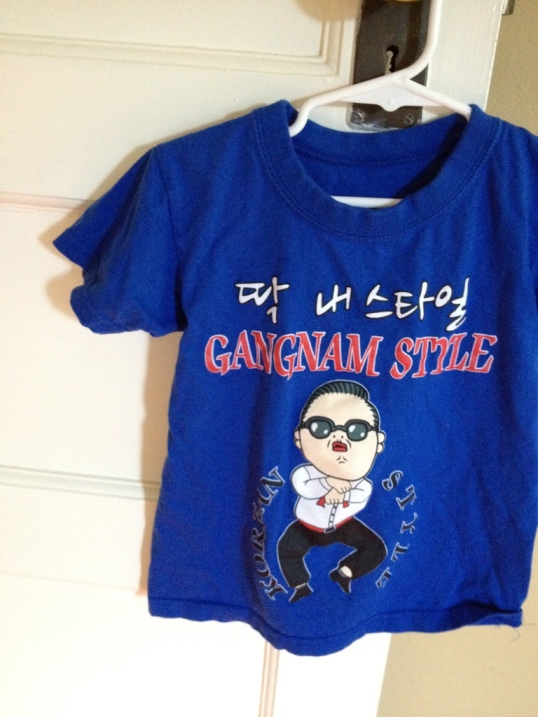 I’ll take any opportunity to inject a little Korean flavor into my kids’ lives, which basically means that we eat a lot of Korean bbq and that I get mad when my kids ask to take Karate lessons and say they want to be goddamn ninjas. Gangnam Style is Finn’s favorite song and has been for a good six months. Finn learned the Korean word “yuh-ja” from that song, which means “woman.” He has taken to greeting me with “What up, yuh-ja,” which is technically not incorrect, as I am a woman, but sounds very rude. Whatever. Even I have to admit that the song is catchy.

But there is a big difference between the song and this shirt, which, let’s be frank, is racist. I can’t even really point to what’s racist about it, but it feels racist. Does Psy look that pig-like in real life?? I can’t be sure. I understand that Koreans designed and manufactured this shirt, because it was procured in Seoul, which makes it worse. Also, my mom bought it, which confuses me further. I mean, she’s more Korean than I am. Am I not getting the joke? I want to get the joke.

Tom and I turned on the TV the other day and caught ten minutes of the Walking Dead. I know everyone loves that show but if you’ve never watched it before and then you watch ten minutes of it, you might be forgiven for having the reaction that Tom and I did, which was to look at each other and laugh hysterically. I only mention that show because this t-shirt looks like something a zombie would wear. But it’s not. It’s actually something that my husband wears.

These shorts are fresh out of the wash. I have no idea what those stains are, but they aren’t coming out. I’ve tried. These look like they were worn by a guy manning the deep fryer at KFC. But when would my three-year old have been around a deep fryer?

Every morning, Tate wakes up and wants to put on a “soccer shirt” and these “sport shorts.” Tate’s actual interest in soccer or sports is arguably less extant than even mine, but his brother wears sports clothes, and he wants to be like his brother in a very bad way. Speaking of brothers, these were part of a complete kit bought for Tate by my brother Mike, a huge AC Milan fan. And I guess that’s why I can’t bear to throw them away.

There’s a whole lot of maize and blue in my house. I don’t buy it, but still, it arrives, via Tom and his relatives.

Here’s the thing about the color maize. No one looks good in it. Especially not Asians (me, my kids) and extremely fair people (Tom). Sometimes the designers like to keep things fresh by replacing the maize with a lighter shade of yellow that you might call “cornflower” but which I call “pancake batter.” No one looks good in that either.

Anyway, we get a fresh influx of Michigan clothes anytime Michigan wins something or, in this case, gets close to winning something. Michigan made it to the NCAA finals this year, and it was a great run. I would never destroy this shirt even though it is intensely ugly. Because I love Michigan. And because it would only replicate itself if I tried to destroy it.

**Tom said I could only use the photos of his t-shirts if I also provided this link. Enjoy.

Tom got annoyed when he saw me taking pictures of his ugly clothes. So I told him to pick the thing he hated most from my wardrobe. So here it is. This offensive J.Crew cardigan, which I’ve had for eight years. Tom says it’s “Talbotty.” Meow.