I got some funny looks when I told people that I was taking the kids to Vegas for Spring Break. Tom and I, despite our staid outward appearances, really enjoy Vegas. We don’t gamble, but we eat like pigs, and window shop, and walk around hand-in-hand gawking at how short everyone’s skirts are. Then we fall asleep at 10:00 PM after eating Doritos from the minibar and watching ESPN. It’s the best.

Our itinerary was so kid-friendly that it sounded completely lame when I’d tell friends about it. I started wondering why we were going to Vegas at all. We were booked at the Four Seasons, chosen primarily because it had no casino, and because it had a 18″-deep kiddie pool. Any parent who’s booked a relaxing vacation only to spend a nervous week worrying that their kid will drown, knows how important it is to have a kiddie pool.

The Four Seasons was predictably great but its kiddie pool is about as big as a hot tub. In fact, I suspect that it is a converted hot tub, because there’s a sign next to it about pregnant women hot tubbing at their own risk. The kids took one look at the kiddie pool, threw their shoes into it, and then asked to play with my iPhone. It worked out, though. We had access to the “beach” at Mandalay Bay, so we hung out there for the better part of three days. In general, everything was fine as long as we stayed near our hotel. Once we left the hotel, things got dicier.

On our first day in Vegas, we went to lunch at the Rainforest Cafe at the MGM Grand, because it has fake animals in it and I stupidly thought the kids would just love that. After waiting 30 minutes in line, we sat down at a table surrounded by a group of animatronic gorillas who would beat their chests amidst strobe lights at regular, five minute intervals. Both kids began crying the first time it happened. Tom helpfully chose this point in time to remind me that the last time Finn had been to the Rainforest Cafe, he had hated it. The kids calmed down eventually but seemed too nervous to eat. Tom complained that his clam chowder tasted microwaved. Tense from the strain of showing my kids a good time, I bit into the cold onion ring sitting inexplicably on top of my burger, and wondered aloud why anyone would order clam chowder at a Rainforest Cafe.

After a nap and more swimming, we made our way to dinner at the Bellagio. On the way, our salty cabbie began waxing poetic about the “old” Las Vegas. The one that didn’t have kids. The one that had the bikini mud wrestling. Finn’s head, which had been focused on staring at the scandalous billboards outside, immediately snapped around. “What’s bikini mud wrestling?” I reacted as I always do when I’m confronted by a kid with a difficult question. I redirected. “Finn,” I said, pointing to the credit card machine in the back of the cab, “Look! It’s a computer.” Tate piped up from his seat. “Can we go to Rainforest Cafe?” “No,” Tom said. “It’s closed.” “For how long?,” Tate asked. “Forever,” Tom said.

waiting for the pirate show

After dinner, we took off on foot for Treasure Island, where Tom assured me there was a fun, kid-friendly pirate show. Even better, it was free. We showed up at 6:30 for the 7:00 show and staked out a front row spot right in front of the pirate ship. While we waited, I killed time by watching an electronic billboard overhead advertising a show called “Sirens of TI.” It featured a bevy of scantily clad women and I turned the boys away from the screen to prevent more awkward questions. I wondered, idly, what “TI” was. Ah! Treasure Island. I watched more of the video. The scantily clad women were gyrating on a stage that looked like…a ship. A pirate ship. I felt a warning bell go off in my head, and tugged on Tom’s sleeve. “Tom. TOM. Are you sure this is a kid show?” But it was 7:00, and Tom was already focused on the stage. “The show’s starting!,” he said. 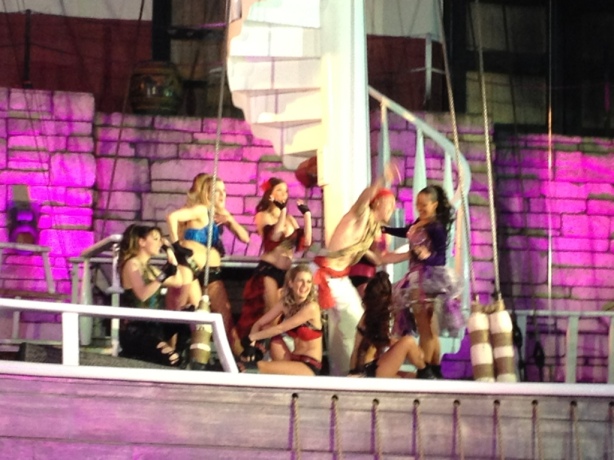 I don’t know. Maybe the show was kid-friendly back in the 70s when Tom was a kid. The 2013 iteration is pretty spicy, and features a main character/stripper named “Cinnamon” who says she’s called “Cin” by all the seamen who have entered her cove. That was an actual line from the show. I squeezed my eyes shut and prayed that Finn wouldn’t ask me what a seaman was. When the rest of the sirens joined Cin on stage to start their number, I started panicking in earnest. But Finn and Tom seemed transfixed by the spectacle. Tate was less impressed. “There’s only one boy,” he complained to no one in particular, in the middle of another dance number/group striptease. 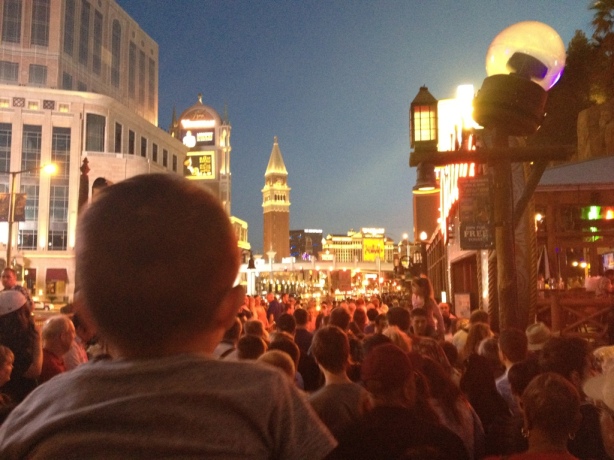 The show only lasted about 15 minutes and involved several explosions, so it wasn’t a complete waste of time. After Cin and the Pirate Captain made out and slunk off to have sex in their “hideaway,” we began walking back towards the Bellagio to check out the fountains. The traffic on the Strip was a bear, and we were walking the same speed as the cars were driving. The car that was moving in pace with my family was a moving billboard advertising naked girls delivered to your hotel room. I put my body between Finn and the billboard and did my best to keep his eyes to the hotel side of the sidewalk. We stopped at the Mirage to look at the Volcano. We finally got to the Bellagio, where we got ice cream cones and cheered the fountains.

The third day, we made our way to Circus Circus, because Circus Circus sounds like a place that would have stuff for kids. I had never been to Circus Circus and Tom tried to warn me ahead of time, but he did a really inadequate job of describing what a complete shit hole it is. It was by far the scariest place I have ever been in my life. Unlike the rest of the Strip, Circus Circus feels like it was built a long time ago, before concepts like ventilation, fire codes, and emergency exits came on the scene. Predictably, my kids were delighted by the nasty chaos and ran through the hotel, running their hands along all available surfaces, ignoring my pleas “not to touch anything.” We waited around for the free trapeze show. It was like 13 minutes long and I swear I could do most of those catches and releases if I went to a week of trapeze school. But whatever. My kids dug it. 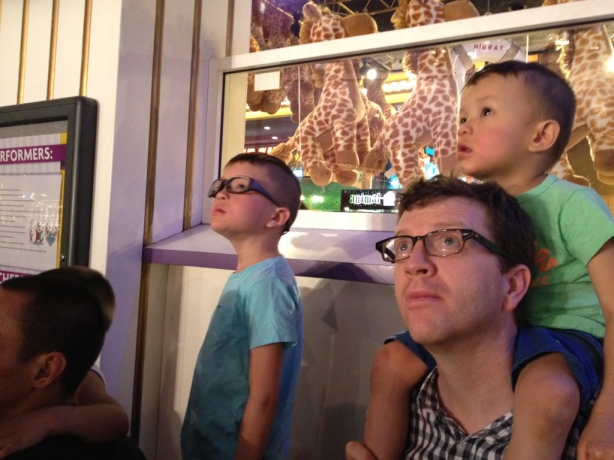 And that was the beauty of this vacation. My kids dug it, from start to finish. And Tom and I had so much fun seeing all the insanity through the kids’ eyes. That’s what vacationing with kids is all about, right?