When I was pregnant with Finn, the time would come at the end of my OB appointments where my doctor would ask if I had any questions about the pregnancy. I had lots of questions, but they were mostly about food. Not food for the baby. Food for me. Like, “The French drink wine while pregnant, so why can’t I,” “Can I eat oysters, and if so, how many;” and “What, exactly, is a ‘soft’ cheese?”

My OB is one of the more attractive older men I’ve met, and I’m already predisposed to developing crushes on men who are responsible for my physical well-being. This is why I developed a crush on the dentist who removed my wisdom teeth, and why I currently have a crush on my spinning instructor even though I hate his class. Anyway, with my OB, I developed a crush that was disturbing (to Tom) in its intensity. I liked my OB so much that I needed him to like me. This all seems irrelevant, but it’s not, so stay with me. This background explains why I couldn’t ask my OB the only question about my baby that I really wanted to ask, which was “Can you tell from an ultrasound whether the baby has a large birthmark on his face?”

Finn came out with no discernable birthmarks although he was so pale that he glowed. But Tate. I should have known from day 1 what I was getting into with Tate, because he came out with all sorts of marks. A lightning-bolt shaped mark on his forearm, a dark thumpbrint on his wrist, and best of all, huge Mongolian spots on his rear end that made his butt look blue. Most of the marks have since faded, but he must have been born with a taste for skin art. Because now he wants tats. And he wants ’em bad. 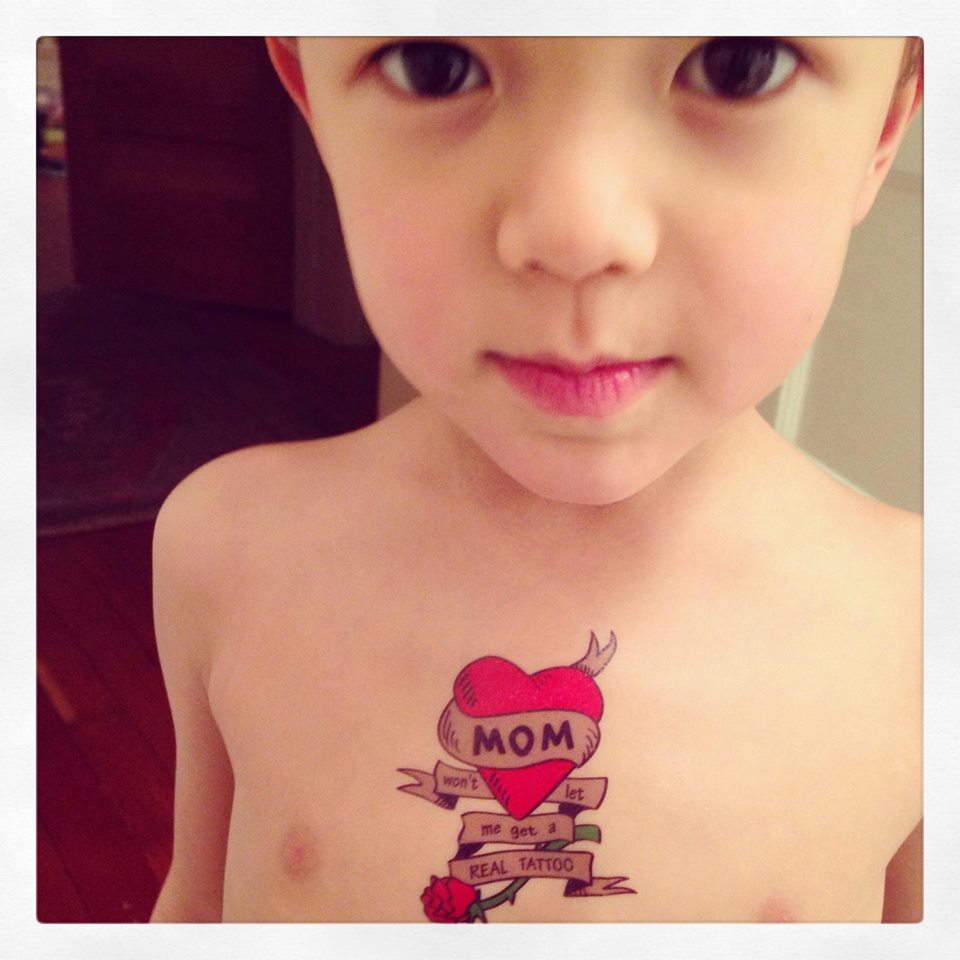 I am sympathetic. Every few weeks I see a cool tattoo on some nubile 20-something in my yoga class and I’ll ask Tom if I should get a tattoo, and he answers as he always does, by staring stonily out the car window in long-suffering silence. If he’s in a lighthearted mood he might say something fun, like “I will divorce you if you get a tattoo. I really will.” But mostly he just stares out his window.

The worst is when Tom plays along and asks what kind of tattoo I’d get. That always gives me pause. The only thing I’ve ever considered is a tattoo for my dad, who is gone. And then I take an even longer pause while I consider that while we never talked about tattoos, I’m pretty sure my dad hated them. And what kind of homage would that be? It would be as if my kids decided to honor me after I’m gone by engraving my name on a pair of man sandals and wearing the sandals everywhere with tube socks. That would be terrible. I can’t do that to my dad.

So maybe a tattoo is not in my future. But something tells me we will be visiting this issue again, when Tate is old enough to beg. Last week he padded up the stairs and stood next to my bed, in the dark. Tate’s voice is at approximately the same pitch/frequency as a dog whistle, and sounds particularly shrill at 5:45 AM. “Grandma says we can go to the tattoo store and get real tattoos.” I poked Tom, who played dead.

When I asked Grandma about the tattoo date, she said that she felt really bad for Tate when she caught him soaking stickers in a plastic bag full of water, trying to make them into tattoos. I tabled the discussion, and Grandma, in turn, brought home some fake tattoos to tide Tate over. He flipped through the tattoo book and landed on the one he wanted. I placed it square in the middle his chest, as directed.

In the mornings, Tate picks out v-neck shirts that will show his tattoo off best. In the evenings, when I try to wash it off, he pushes my hand away, or screams.

Have a tattoo? Even better, have a kid who wants a tattoo and is coming of age? I’m all ears.