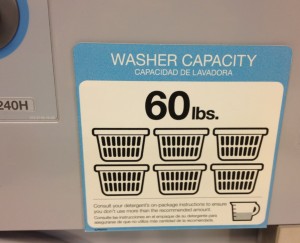 My washing machine died on Monday. I could tell you exactly how it happened, except I don’t know. What I do know is that a repair person diagnosed the problem as catastrophic. He has no idea.

When the washer broke, we were already behind on laundry. While we decide whether to pay $800 to fix the old machine or $1000 to buy a new one, the load of laundry that broke the machine has been sitting, rotting, in the drum. I’ve ruined a lot of clothing by letting it get mildewy in the washer, and this particular load had about $300 worth of Hanna Andersson pajamas in it. So as the hours ticked by, I’d try not to think of that load, because when I did think about it, I’d feel the vapors coming on. Eventually I prevailed upon my awesome neighbors Anne and Dennis, who opened their doors and their washer to Cuz, who kindly washed the load while I was at work.

But that load only bought me a day’s peace, because on Tuesday, I started running out of underwear. I stood in front of my drawer, looking at the last two pairs of cotton granny pants on the left, and the two fistfuls of Hanky Panky thongs on the right, which have not been touched since the day that I decided once and for all that my butt cheeks prefer not to have material lodged between them all day. Linds suggested that I drop all our laundry at her place, and that she could do the loads in the evenings. I was tempted, but I couldn’t. I mean, I’m hopeful that one day a hand will be able to reach into my boys’ hamper feeling assured that it will not graze dried feces, but I suspect that we’re yet years away. I couldn’t do that to Linds, best friends or not.

Which leads me to tonight. After dinner I looked solemnly at Tom, Cuz, and the boys, who were wearing clothes they’d worn for two days. We all knew it was time. We packed the car with five full loads of laundry, and off I went, wearing the stoic expression I reserve for moments of extreme martyrdom. Here’s the thing though. I love doing laundry. With every completed load, I feel a sense of freshness, satisfaction, and rebirth. It is definitely my chore of choice, although I also really enjoy organizing and labeling my spices with my labelmaker. And laundromats? They get me crazy. I f-ing love them. Because you can do like ten loads at a time, and fold ten loads at a time, and nothing turns me on like efficiency. 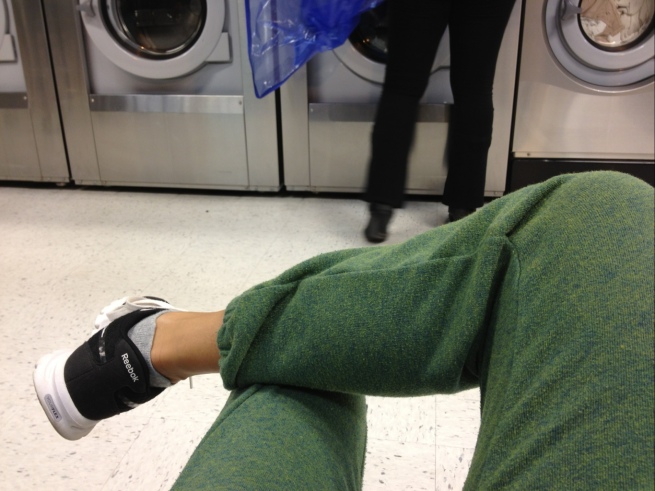 In fact, I’d live in a laundromat if it weren’t for the people. With everyone washing and folding and making change, you feel a sense of common purpose with the other people in the laundromat, or you would, if they weren’t complete freaks. In a place like NYC, everyone goes to a laundromat, because most people live in apartments without washers. In Portland, there is a very small subset of people who go to laundromats. Hipsters, older bachelors, transients, people with broken washers. A tall skinny guy who was surrounded by an almost visible nimbus of pot smoke sidled over to me as I was filling a dryer. “Uh, I don’t want to sound sketchy, but there’s a pair of black Victoria’s Secret panties over there that might be yours.” Uh, so much for not sounding sketchy. A hipster couple kept trying to engage me in conversation. For what possible reason would you want to engage in conversation with a stranger at a laundromat? Clearly they sought to distract me so they could steal my clothes. I crammed my Yogitoes and Lululemon into the bottom of my basket and kept my eye trained on them the rest of the night.

Well, I did it. Five loads of laundry, washed and folded. In 90 minutes. Granny pants for days. Medal of Valor, you say? Nobel Peace Prize? Don’t mind if I do.