the elf on the GD shelf 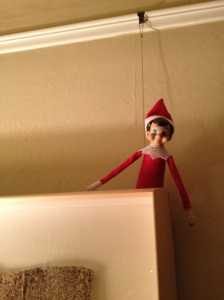 The Elf on the Shelf. Either you’ve wrestled with one in your life, or you have friends on FB who are wrestling with one and lashing out by posting photos of their elves doing unsavory things. Either way, the epidemic refuses to be contained.

The EOTS is a small bendy elf figure that “watches” your kids and supposedly flies back to the North Pole every night to rat them out to Santa. The idea is to trick your kids into behaving less like wild animals throughout the month of December than would otherwise be the norm.

Simple enough premise, right? Right. Personally the thing I dislike most about the EOTS is that I didn’t invent it. I’ll give credit where credit is due, and whoever invented this thing and then boxed it up for sale is a freaking genius. Because once you buy one, you’re committed to an annual tradition that inspires such dread that you’d swear the thing was created by Satan himself, if that sentiment didn’t seem so anti-Christmas. You hate it so much that you can’t help talking about it, and then other innocents go out and buy one for their families out of sheer curiosity, and pretty soon, you’re looking at world domination.

Our EOTS is named Rindy. Finn named him two years ago when he was four and that’s all I have to say about that corny name. Personally I’d have gone with “Succubus” or “Evil Malingerer,” but Finn wanted to write “Rindy” down in the little space provided for the elf’s name in the associated EOTS hardcover book, and that was that. The doll itself has a vintage charm that in the light of early morning looks positively demonic. Spindly little legs and arms and a face dominated by large cracked-out eyes, the better to watch your kids. The EOTS is creepy enough that I’m always nervous that I’ll come downstairs in the morning and Rindy will actually be running around, rearranging ornaments, or that he will swivel his head towards me and giggle, “Yoona, you’ve been a verrrrrry naughty girl!” 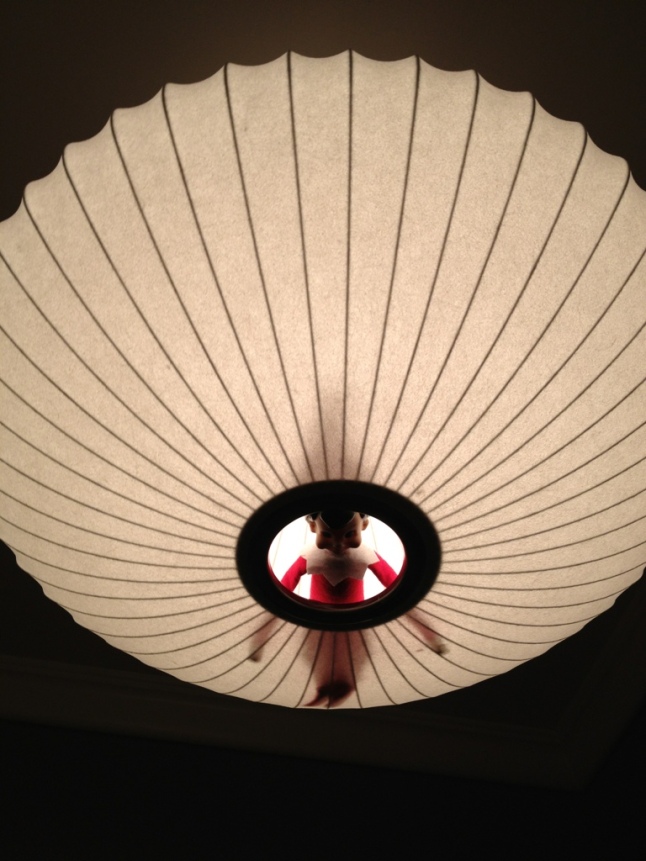 The EOTS has to be moved every night, to maintain the fiction that he flew back to the North Pole at night and flew back for a new day of surveillance and tattling. But by bedtime, Tom and I are so tired and depleted of mental resources that we always forget to move Rindy before we go upstairs, which means that when 6:00 AM rolls around and we awaken to the peaceful sound of Finn screaming at Tate to get out of his room, one of us has to race down to the first floor and move Rindy before the kids make it downstairs. We have forgotten to move him a couple times and Tom had to spin a complicated yarn about Rindy choosing the same spot as the day before because he really liked the view. Ahhh. Nothing says Christmas like a web of lies.

Here’s the other thing about moving the EOTS: you can’t just cram him anywhere. With the EOTS, placement is all. He has to be high enough that the kids can’t touch him, because imagine the hysteria that would ensue if someone accidentally jostled the EOTS and he fell lifeless to the floor. That has never happened but you can be damned sure that I’m neither emotionally nor intellectually equipped to explain the situation to my kids, if it ever does.

In moving the elf, you also have to be careful to orient the EOTS’s eyes towards the space in the room where people would normally hang out. I learned this the hard way when I told Tate that Rindy would tell Santa if he didn’t eat his eggs. Tate shrugged. “Rindy’s not looking at me.” I looked up and saw that Tom had placed Rindy on top of a painting, with eyes facing towards the windows. Shit! Geez Tom, do I have to do everything??

Finn’s six now but he’s still on board with Rindy. Let’s face it, Finn would be on board with Strawberry Shortcake if she led to presents. If I need the EOTS to help keep anyone in line, it’s Tate, who approaches life as if he is Godzilla and the rest of us are the cowering city of Tokyo. But of course Tate is immune. Last week, he walked past the EOTS, muttering to himself. “Stupid Rindy.” I started to tell Tate that Santa wasn’t going to be happy that he said “stupid,” but I didn’t have the heart to continue the charade.